By Miranda Raye on January 25, 2021
Advertisement 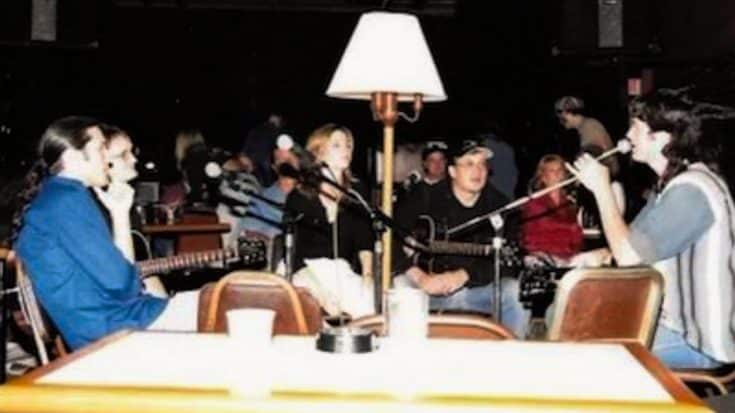 It’s always fun to look back at old photos and reminisce on what life was like when they were taken. A single picture can remind you of people, places, and experiences that were once prevalent parts of your life.

A picture can also remind you of the type of person you were at the time. You can look back on the picture and see how much you’ve grown since then, and how far you’ve come.

Country superstar Blake Shelton was doing some of this self-reflection after looking at an old photo snapped at the start of his career.

Taking to social media, Blake shared a photo his old friend, Amber, sent to him. The picture shows a much younger Blake seated in front of a microphone with a guitar in his lap. He was also sporting a full-on mullet, truly embodying the phrase “business in the front, party in the back.”

Blake’s friend Amber and someone named Bryan were in the picture as well. Two other country singers also appear in the snapshot: Grammy-nominated country singer Phillip White and “Tequila Makes Her Clothes Fall Off” singer Joe Nichols.

Joe is the singer who appears on the far left of the photo, directly across from Blake. He too, was sporting a much longer hairstyle back in those days!

Blake didn’t know exactly when the picture was taken, but said it was quite some time ago:

“…we were still kids in Nashville just trying to make it in this picture,” he said. “So crazy how it’s already 25 years or more later.”

Joe released his debut, self-titled album in 1996 and had his breakthrough with his 2002 album Man with a Memory (which contained the #1 single “Brokenheartsville.”)

As for Blake, his debut, self-titled album was released in 2001. It contained his now-famous singles “Austin” and “Ol’Red.”

Now, both Blake and Joe are household names within the country music world. It’s wild to see how far they’ve come!

Look below to see the throwback photo Blake shared of him and Joe. We love seeing old pictures of country singers before their big breaks!