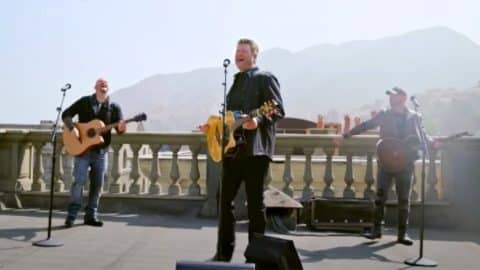 The 15th season of America’s Got Talent featured many musical artists, but Broken Roots stood out from the start. Comprised of members Austin and Joey, Broken Roots delivered their first-ever performance as a duo during their AGT audition.

Austin and Joey had previously been popular solo artists in Chicago with different musical styles. Austin was a country artist while Joey’s specialty was rock and pop.

After being told by various venues that the two of them should consider working together, Austin and Joey met. They weren’t sure how they’d mesh their different musical styles, but took a leap of faith and decided to form Broken Roots.

The rest, as they say, is history. They sang “Wanted Dead Or Alive” by Bon Jovi for their AGT audition, and the judges were blown away.

However, Broken Roots’ run on the show came to a halt when they were eliminated during the Judges Cuts. But the judges eventually changed their minds and decided to bring Broken Roots back on the show as a Comeback Artist.

Broken Roots excelled from that point forward. They wowed the judges and viewers alike with their performances of songs such as U2’s “I Still Haven’t Found What I’m Looking For” and “God’s Country” by Blake Shelton.

They delivered their cover of the latter song during the semifinals. The official YouTube video of their performance has earned well over 146,000 views since it was posted on September 8.

Thanks to performances like their “God’s Country” cover, Broken Roots advanced all the way to the AGT finals. During the finals, the duo got the opportunity of a lifetime when Shelton turned up to sing “God’s Country” with them.

Shelton and Broken Roots performed from the roof of a tall building, which added a dramatic feeling to their performance. Tune in to the video below to check it out!

After hearing this performance, it should be pretty obvious why Broken Roots did so well on AGT. If you watched the season finale, you know where they ended up placing!

Congratulations to Broken Roots on all of their success. We wish them the best.