By Miranda Raye on June 6, 2018
Advertisement 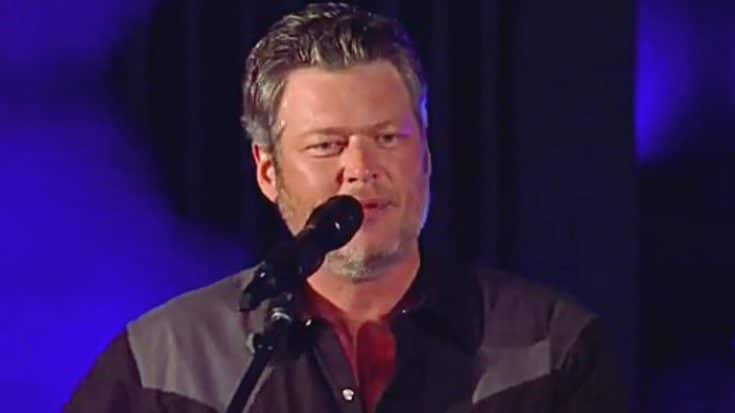 When the CMT Music Awards announced its first set of performers in 2018, one major name stood out to fans…Blake Shelton.

Shelton was surprisingly absent from the awards show scene for a couple years prior to this performance, as he hasn’t been up for many awards. But with the release of his album Texoma Shore in November 2017, he placed himself back in the running for some big awards.

In addition to performing at the 2018 CMT Music Awards, Shelton was also up for a couple of awards for his music video for “I’ll Name the Dogs.” The clip was nominated for both Male Video of the Year and was in the running for Video of the Year.

Debuted in September 2017, “I’ll Name the Dogs” was the first single Shelton released from Texoma Shore. Its followup, “I Lived It,” was released in January 2018 and was his most current single at the time.

Because of this, it was the latter song that Shelton sang during a sentimental performance at the ACM Awards in April that year. So leading in to the 2018 CMT Music Awards, fans were curious to know if he’d sing it again, or pick another song entirely. After all, the awards seemed like the perfect place for him to debut a new single!

When it came time for Shelton to perform, the song that he graced everyone with was none other than his sexy track “Turnin’ Me On.”

Earlier in the day, Shelton celebrated the grand opening of his Ole Red bar in Nashville. So it only seemed fitting for him to incorporate the venue into his CMT Music Awards performance!

Shelton decided to perform at the Ole Red bar, but he didn’t pick any old place to set up his stage. He opted to perform from the roof, taking his performance to new heights!

As is always the case at awards shows, Shelton’s performance was a highlight of the 2018 CMT Music Awards. Tune in to the clip below to catch the performance in case you missed it!