By Miranda Raye on August 16, 2019
Advertisement 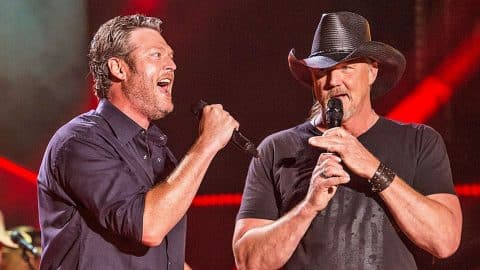 In 2009, Blake Shelton and his longtime mentor Trace Adkins released their first collaboration. Titled “Hillbilly Bone,” the rowdy song had the two best buds singing about how every person has a little bit of hillbilly in them, no matter where they grew up or how they were raised.

The pair released the perfect music video to accompany the song. Shelton and Adkins can be seen entering a fancy restaurant and turning heads over the country boy appearance. But by the end of the video, they have everyone in the room embracing their inner hillbilly.

Fans go wild every time Shelton and Adkins are able to sing “Hillbilly Bone” together live. So after a decade with no new collaboration from the two friends, it seemed like the perfect time for them to sing together again.

When Shelton heard a song called “Hell Right” that was co-written by one of the writers behind his #1 hit “God’s Country,” he knew he had to record it. He invited Adkins to join him, and of course he agreed!

The two friends had been teasing the collaboration for days leading up to its debut. As the days ticked down to the release date (August 16), fans became increasingly anxious.

That’s a big #HellRight. New music THIS Friday with @traceadkins.

At last, “Hell Right” is here, and it’s just as rowdy sounding as the title would lead you to believe.

The song has Adkins asking Shelton to tell him a story, so Shelton begins talking about two hard-working guys who finish their shifts and just want to have a drink. He also talks about a couple of country girls who turn off Lil Nas X’s megahit “Old Town Road” in favor of playing Hank Williams Jr.

The referral to the iconic Bocephus song prompts Shelton and Adkins to exclaim “hell right!”

Overall, “Hell Right” has a cool, casual vibe that seems fitting for two longtime friends like Shelton and Adkins. You can listen to the song’s official audio clip below.

After listening to this, we want to hear even more collaborations between these two!