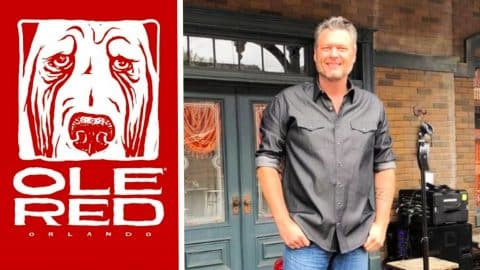 Two additional locations soon followed, both in Tennessee. The second location opened in Nashville, and the third opened in Gatlinburg.

All of the Ole Red locations serve as restaurants, bars, and music venues. The menu varies depending on location, but some staples include chicken pot pie and whole lot of fried food.

Of course, there are also plenty of drinks to be found.

Just because it's winter doesn't mean you don't need a cold drink in your hand. #oleredgburg

Those who visit any of the Ole Red restaurants get the chance to enjoy some live entertainment. Up-and-coming and local acts can be heard playing at the three Ole Red locations on almost any given day.

The Ole Red stages have also served as the perfect places for past Voice contestants to build their fanbases. And Shelton himself will even pop in and play a show from time to time!

Now, the Ole Red lineup is about to gain a fourth member. A new Ole Red location is being constructed in Orlando, Florida, and its doors are set to open in mere months!

News4Jax reports that Ole Red Orlando is scheduled to open on April 13 of this year. The new restaurant/bar/performance venue will be located on International Drive, a popular area that already houses a number of bars, restaurants, museums, and a 400-foot Ferris wheel called the Orlando Eye.

“When it opens, the 17,289 square foot Ole Red will offer a live music experience and feature concert-quality lighting, up-to-date acoustics and seating for about 500 people,” News4Jax reports. “Guests can also expect private event space for weddings and other gatherings plus three bars.”

Have you heard? Tell all your friends, and we’ll see y’all soon!

No menu for the Orlando location has been released, but News4Jax says “Orlando-only dishes” will be offered at the restaurant. The Orlando location will also offer fan-favorite fare from other Ole Reds, including the Champagne of Fried Chicken dish.

If everything stays on schedule, Ole Red Orlando will open just a little over a year after Ole Red Gatlinburg. Tune in to the below video to hear Shelton talk about the Gatlinburg location’s grand opening in March 2019.

We don’t know about y’all, but now we’re itching to visit Orlando in the spring!

Have any of you ever been to one of Shelton’s Ole Red restaurants before? If so, then you know the Orlando location will be something you can’t miss if you’re on a Florida vacation!