By Miranda Raye on November 24, 2021
Advertisement 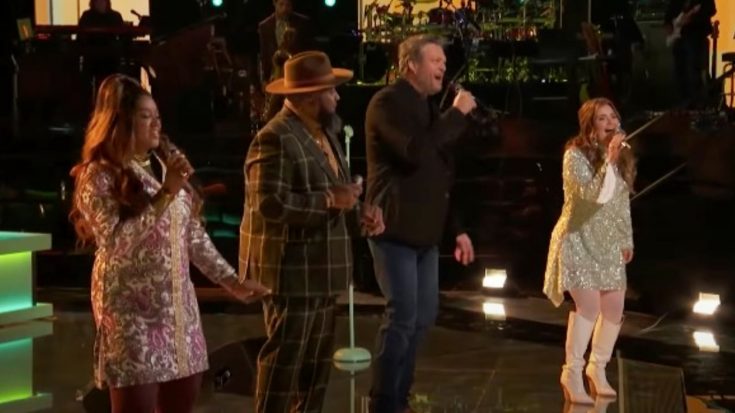 After ten years on The Voice, Blake Shelton knows how to pick the best singers to make his team as powerful as can be. His Season 21 team was one of his most talented groups ever.

Toward the end of the competition, Shelton’s team consisted of Paris Winningham, Wendy Moten, and Lana Scott.

Shelton and his team sang a cover of the Motown classic “I Can’t Help Myself,” also known as “Sugar Pie Honey Bunch.” The song was originally recorded by the Four Tops and was released in 1965.

Voice fans loved every second of Team Blake’s “Sugar Pie Honey Bunch” performance. One Twitter user named Linda Wetzel called it “the best performance with Blake’s team since he started the first year with The Voice.”

You can read Wetzel’s reaction to Team Blake’s performance and a few other responses below.

The best performance with Blake’s team since he started the first year with The Voice. I love being a #1 fan of Blake Shelton❤️

Cool performance. I almost always find Team Blake performances to be the most fun to watch. They look like they actually enjoy performing the song they're singing.

Who would have ever thought we would see Blake Shelton lead a Four Tops classic—and nail it!

The group’s performance also drew some attention for what happened immediately after they finished singing.

As the contestants and Shelton made their way off of the stage, Moten tripped over something. She fell, hard, and crew members rushed to help her.

Host Carson Daly temporarily halted the show to make sure Moten was alright. Shelton later shared an update on how she was doing, saying, “Wendy’s ok, don’t worry…hurt her elbow a little bit, I think she’s gonna be fine.”

Thank you America 3 for 3! Proud of you Lana, @ParisWinningham, and is there anything that can stop @WendyMoten? The answer is no! #TeamBlake #TheVoice pic.twitter.com/cjHFWlJQJ3

Thankfully, Moten was feeling well enough to return to the competition the following week.

Moten and her teammates all advanced into the Top 10. Moten went on to be named the runner-up of the season.

Tune in to the video below to watch Team Blake deliver their outstanding performance of “Sugar Pie Honey Bunch.”