By Jennifer Pernicano on February 20, 2020
Advertisement 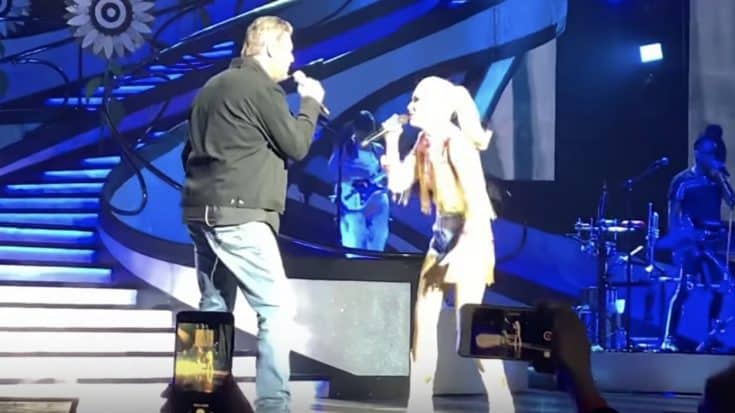 In December 2019, Blake Shelton and Gwen Stefani released a duet titled “Nobody But You.”

It debuted at the ninth spot on Billboard‘s Hot Country Songs chart, making it the No Doubt lead singer’s first Top Ten country hit. Their previous duet “Go Ahead And Break My Heart” peaked at number 13 on the same chart.

The couple of four years has only been able to perform the song live on one occasion…during the Grammy Awards in January.

Shelton is in the middle of his Friends And Heroes Tour, while Stefani has her residency in Las Vegas. Each has worked the song into their set by using video of the other from the music video.

Here is Shelton singing “Nobody But You” at one of his shows.

Pretty amazing to wake up to this on Valentine’s Day @blakeshelton ? #nobodybutyou #friendsandheroestour Gx

And below is Stefani performing it in Vegas.

Turns out, Shelton had a couple days off so he showed up in Vegas to be with Stefani and together, they performed “Nobody But You.”

Fans in the crowd did not know Shelton would actually be there, so when he walked out on stage, everyone went crazy! They ended the performance with a huge hug, and Stefani even wrapped her legs around her beau.

Watch their duet in the videos below.