By Manly Bryant on November 13, 2018
Advertisement 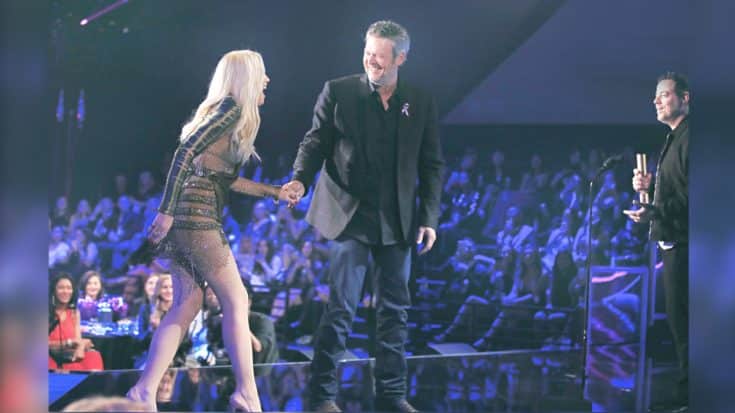 Blake Shelton‘s 2018 E!’s People Choice Award speech was less about him and more about a very special someone this time around.

Blake Shelton is known for many things. From being a famous country singer to starring as a coach on The Voice – he’s done it all. Heck, he even has his own brand of vodka!

And all his hard work has paid off. Standing next to Carson Daly to receive their Competition Show of 2018 award, Daly reminds us that not only will this be Blake’s second People’s Choice Award but he was also People’s Sexiest Man Alive. Daly even told the country star, “You’re very popular among People.”

‪Thank you @people!!!! Don't hate me because I'm beautiful… ‬

He Declared His Love On National T.V.

But when it came for Blake to give his acceptance speech, he mentioned very little about himself or his accomplishments. Instead, he turned the attention to his partner, Gwen Stefani.

Pointing at to his leading lady as she sat in the crowd he exclaimed, “All-time favorite coach right there, Gwen Stefani. I love her!”

As the camera panned over to Gwen, you could tell she was blushing from the attention as she was getting.

Gwen Gives Her Own Speech

If being recognized during the speech wasn’t enough, the boys invited the pop-sensation to come give her own speech. At first, she shook her head shyly trying to avoid getting up on the stage but ultimately she was coaxed into it.

She blushed as she told the crowd, “Oh my gosh, I’m so excited to be with Blake Shelton.”

You can just see the fireworks between this happy couple.

The beautiful chaos that is Gwen and Blake ???#PCAs pic.twitter.com/rNE58g6ULD

Even with all the craziness and award ceremonies, the couple stays grounded in what really matters – loving and supporting each other along the way. Gwen posted an adorable photo of the two on the red carpet congratulating her man.

He Still Remembered To Thank Our Veterans

On top of all this, Blake humbly remembered those who have fought for our freedom. Wearing a red, white, and blue pin to honor his late father – he thanked service members saying, “I’m wearing this tonight in honor of my dad who is a veteran. Thank you to all the veterans out there.”

And he wasn’t the only one. Many other tributes were made throughout the night by various celebrities. You can watch the full awards ceremony in the video below and let us know what your favorite part was in the comments!