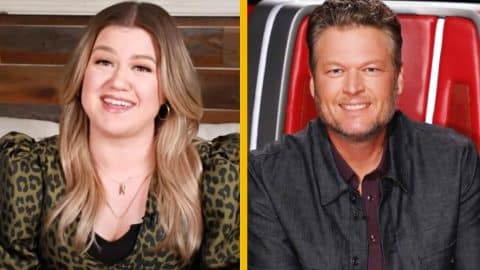 In a playful round of “Most Likely To…,” Clarkson revealed quite a few new details about Blake Shelton. When the category switched to the topic “most likely to pull a prank,” Clarkson shared one of Shelton’s pranks on The Voice host, Carson Daly.

“He [Blake] does this thing where I think it looks like pee in [Daly’s] cup or something like in his bathroom…I don’t know what juice it is, apple juice obviously or something like that, but Carson told me — he was like, ‘It took me forever. I just kept coming in my bathroom, and there would be a giant glass just right on my toilet, and it looked like pee.'”

After Clarkson revealed Shelton’s prank on Daly, she interjected her reaction to the talk show’s viewers. Clarkson stated:

Hilariously, Clarkson continued to pick on Shelton throughout the segment and crowned the country crooner as both most likely to break the law and shortest temper.

See the full segment in the video below.