By Jennifer Pernicano on May 28, 2020
Advertisement 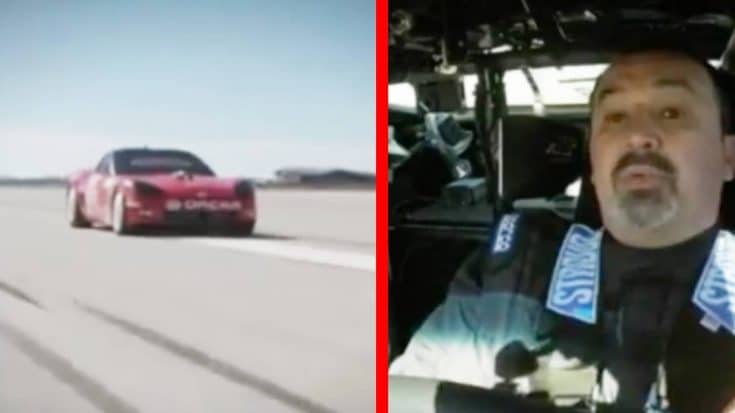 Racing is in Dan Parker’s blood. His father, Jimmy Parker, still races to this day!

Parker began professionally racing in 1997. In his career, he’s won a Dixie Pro Stock championship and the 2005 ADRL Pro Nitrous world championship title, but in 2012, a “horrific wreck” left him fighting for his life. On his official website, he says, “I was rendered completely blind as a result.”

Despite having lost his sight, Parker was determined to not let this stop him from achieving his dreams. In 2013, he built a motorcycle and became the first blind man to race at the Bonneville Salt Flats. The next year, he set a record in his class with no exemptions for his blindness.

According to his website, his next goal was to become the “world’s fastest blind man with a 210 MPH goal.”

He built a 2008 C6 Corvette with the help of his friend from Boeing. According to Yahoo! Entertainment, the vehicle is equipped with “an incredibly advanced navigation system,” which includes “gyroscopes, GPS units, and inertia switches.”

Parker says the system is designed to “predict the car’s travel and instantly relay that back via audible feedback.”

He appeared on the most recent episode of Jay Leno’s Garage and told the longtime TV host that in 2014, a blind driver from the UK by the name of Mike Newman set a record of 200 mph with human assistance. Parker wanted to go 10 mph faster, but without any human assistance.

Because of the windy weather conditions the day of the attempt, Parker realized he likely would not be able to hit 210 MPH, but he thought he’d be able to hit around 140 MPH, which would still give him the record as the world’s fastest unassisted blind man.

Before hitting high speed, Parker took Leno on a ride in the vehicle to show him how he drives. A voice can be heard telling Parker to stay or turn his steering wheel a bit to either direction.

Before taking off, Leno said, “I’d say let’s see what happens, but that would be inappropriate,” which got a big laugh from Parker. Leno then waited for Parker at the finish line when the blind racer took off.

It should be noted that there was another driver in the vehicle with him for safety precautions, but Parker had full control of the car. Viewers watched as Parker’s homemade race car built up speed, until it finally reached top speed at 152 MPH. When Parker heard this number after coming to a stop, he celebrated and sounded like he was getting emotional, too.

When Leno went to hug him in congratulations, Parker jokingly felt for Leno’s famous chin for confirmation, saying, “Who’s this … oh, this is Jay Leno!”

Watch it all go down in the video below.