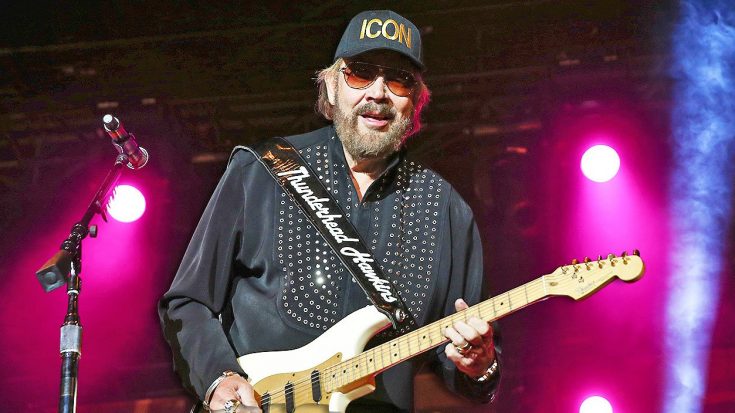 The name Hank Williams Jr. and the word legend pretty much go hand in hand. He paved the way for many artists in the country music genre and definitely is not afraid to speak his mind.

Many a country star consider him a hero, which is probably why he is referenced in so many songs! We decided to compile a list of a few of them for your listening pleasure to remind you just how many people Hank Jr. influenced!

Gretchen Wilson is a huge fan of Hank Williams Jr., so hearing his name in one of her songs should be no surprise. They eventually teamed up a couple years after the release of “Redneck Woman” for Hank Jr.’s song “That’s How They Do It In Dixie.”

“You won’t know what to do when you hear Thunderhead sing
Now Mr. Hawkins got a family tree
He got that their legendary cabin down in Tennessee
You know he’ll hook up that guitar everybody gather ’round
You stay close to the fire when the sun goes down”

Blake Shelton has covered Bocephus a few times in his career and in his song “Boys ‘Round Here,” he sings about putting a Hank Jr. song on the jukebox.

“Well the boys ’round here don’t listen to The Beatles
Run ole Bocephus through a jukebox needle
At a honky-tonk, where their boots stomp”

Justin Moore’s song “Small Town USA” was included on his 2009 self-titled album. He references Hank Jr. in the second line of the first chorus. The name changes in the second chorus to David Allan Coe, and to the Lynyrd Skynyrd song “Sweet Home Alabama” in the third.

“Give me a Saturday night my baby by my side
A little Hank Jr. and a six pack of lights
Old dirt road and I’ll be just fine”

This Trace Adkins song was written by Jamey Johnson, a known friend of Hank Jr, as well as Rivers Rutherford and George Teren. It quickly became Adkins’ second number one single and first since his 1997 song “(This Ain’t) No Thinkin’ Thing.”

“Or why she’s ridin’ in the middle of a pickup truck
Blarin’ Hank Jr., yellin’, ‘Turn it up!’
They raised her up a lady
But there’s one thing they couldn’t avoid
Ladies love country boys”

“Country must be country wide
In every state
There’s a station
Playin’ Cash, Hank, Willie, and Waylon
In foreign cars and four wheel drives”

Superstar duo Brooks and Dunn’s chart-topping song “Play Something Country” referenced several country music icons including Hank Jr., Patsy Cline, and George Strait. They based the song’s central character on Gretchen Wilson, who they were touring with at the time.

They created a “ballsy chick that bursts into the barroom, puts her hand on her hip…and goes, ‘play something country!’” according to SingSnap. Since the character is based on Wilson, they had to include Hank Jr. for more reasons than one.

Kid Rock and Hank Jr. are very good friends, with the latter being a huge influence on the former. They have collaborated quite a few times, and Kid Rock wanted to write down his feelings towards the country legend in the song “Jesus and Bocephus.”

When Eric Church was on tour in 2012, he was inspired to write the song when he was watching a NASCAR race on television. Though the song is not actually about racing, it’s about the experience with your friends and knowing that the moment won’t last forever. He references Hank Jr. by first name, Randall, in the song “Talladega.”

Rockin’ Randall, gettin’ rowdy,
Shooting roman candles at the man in the moon,
‘Til the Alabama sun was breaking

Bend those strings till the Hank comes out
Make all the drunk girls scream and shout
We love it, we hate it, we’re all just trying to make it
In this crazy town

11. “Rasied On Country” by Chris Young

Chris Young’s hit song was released January 28, 2019 as the first single to his album Famous Friends. The song reference many country legends that he was raised listening to, even referencing Hank Williams Jr’s song “Family Tradition.”

“I was raised on Merle, raised on Willie
Got my Honky Tonk attitude from Joe Diffie
Daddy did it too, it’s family tradition
If someone cranks it up, you can’t help but listen
My upbringing sounds like George Strait singing
And I gotta give props to the radio, ’cause if you know me
I was raised on country”

Did you grow up on a tractor?
Did your daddy let you drive?
Are you whiskey bent and hell bound
Even though your mama tried?
Did you cruise down a backroad
With your Dixieland delight?
Are you on the Chattahoochee
On a barefoot blue jean night?

What’s your favorite song that references Hank Williams Jr.? Let us know in the comments!