11 Photos That Showcase The Love Between Thomas Rhett & Lauren Akins 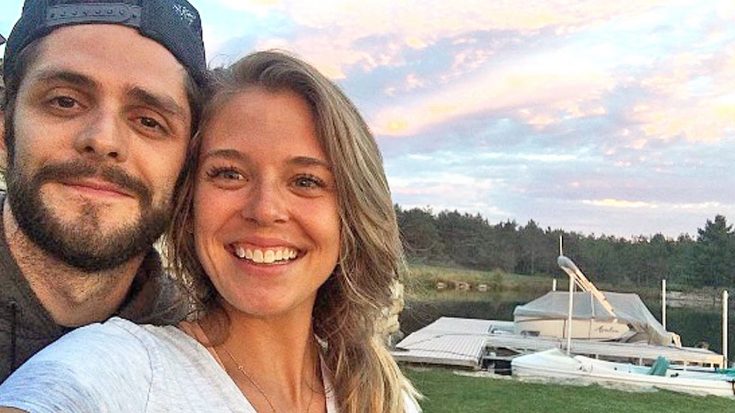 Thomas Rhett and Lauren (Gregory) Akins met each other in the first grade, of all places. The two became fast friends, and remained close throughout their school years.

When they were 15, that friendship turned to romance, and they began dating. But their relationship only lasted for six months before they decided to go back to being friends. They moved on and dated other people, but eventually found their way back to each other.

The two were married on October 12, 2012, and have been at the center of attention in the country music community ever since. Interest in the couple soared after Thomas released his hit single, “Die a Happy Man,” which he co-wrote after feeling inspired by his relationship with Lauren.

Fans have had the chance to get to know the couple through Thomas’ music and their sweet Instagram posts about one another and their beautiful family. Head down below to see some of their cutest photographic moments!

1. When They Embraced Their Inner Cowboy & Cowgirl

When it comes to Halloween costumes, Thomas and Lauren go “to infinity and beyond.” One year they dressed up as characters from Harry Potter, but it was their 2015 costume that really wowed fans.

Embracing their country roots, Thomas and Lauren dressed up like Woody and Jessie from the Toy Story series. Aren’t they the cutest cowboy and cowgirl you’ve ever seen?

2. When They Celebrated A Big Award Win

From the bottom of my heart … thanks y'all. We did it! #ACMs #dieahappyman

“Die a Happy Man,” the song that Thomas co-wrote with Lauren in mind, was one of the biggest songs of the year after it was released. So it was no surprise when it was nominated for an ACM Award for Single Record of the Year.

But it was a huge surprise to Thomas and Lauren when “Die a Happy Man” took home the award. Someone managed to capture the picture-perfect moment when they heard the name of the song announced, and it’s one of our favorite pictures of the couple.

Completely overwhelmed, Thomas rested his head on Lauren, while she appeared to be in complete shock. We can’t imagine what they must have been feeling in that moment!

We are so happy to announce that we are pregnant and we are in the process of adopting a child from Africa! Safe to say life is about to get crazy! ?

In February 2017, Thomas and Lauren made a big announcement to reveal that their family was growing times two! With big smiles on their faces, the couple posed with a large batch of balloons that spelled out “baby” to reveal that they were expecting their first child together!

But that wasn’t the only news they had to share. That same day, they also revealed the fact that they were currently in the process of adopting a child from Africa! Thomas said it best when he made the announcement, writing “life is about to get crazy.”

4. When They Introduced Willa Gray

Everyone meet Willa Gray Akins! I can't believe our daughter is finally home?? We have been in this adoption process for what seems like forever and are just so filled with joy that we are all finally home together! Thank you to everyone who prayed every single day for this sweet girl. The Lord blessed us with the most amazing little girl we could have ever dreamed of and we can't wait to watch her grow up! #daddyforreal @laur_akins

In May 2017, Thomas and Lauren shared that the moment they had been waiting for had finally arrived. After well over a year, the adoption process was finally complete, and they were able to bring daughter Willa Gray home from Uganda.

The couple introduced their daughter to the world through a series of joyful Instagram posts, including the one above. “The Lord blessed us with the most amazing little girl we could have ever dreamed of,” wrote Thomas.

5. When They Spent Quality Time With Willa

Thomas was on tour for most of 2017, and Lauren and Willa went almost everywhere with him. Willa even made her stage debut during her dad’s tour, much to the delight of his fans!

Behind the scenes, Thomas and Lauren enjoyed some personal time with Willa before they welcomed their second daughter in August. In this picture-perfect snapshot above, Lauren can be seen holding up a toy microphone to Willa, seeing if she has the same passion for performing as her father.

Willa seemed less than enthused, though Thomas quipped that his daughter is now “looking for management.”

6. When They Took Maternity Photos

This pic makes me so happy because we haven't done personal photos since our wedding almost 5 years ago (?) and I just realllyyyyy do like him a lot & we're not a dressed up on a red carpet with a bunch of fancy clothes and make up-just me and him on the farm in our happy place…yes @thedryhousenashville did my hair (I mean clearly) but other than that, this is us in our real life and I looooovveee it?? (although maybe next time we do personal photos I'd like to not be 40 lbs over my normal weight hahah?) I love you honey! Best baby daddy a girl could ever dream of ? • • • ?: @juliepaisleyphotography

To celebrate the impending arrival of their second daughter, Thomas and Lauren took a series of stunning maternity photos together. Willa was featured in a few of them, but it was this sweet shot of just Thomas and Lauren that people fell head over heels for.

Lauren was in love with the photo as well, writing “this pic makes me so happy because we haven’t done personal photos since our wedding…“

7. When They Welcomed Ada James

Last night at 10:28 PM Ada James Akins was born and it was truly the most amazing thing I have ever experienced. I can't believe that we have two daughters!! My wife @laur_akins labored almost 36 hours?She is by far the strongest human being I have ever met and I have a new found respect for moms around the world. We are so excited that Willa Gray has a baby sister! Thank you Lord and everyone for the prayers?? #outnumbered

On August 12, 2017, Thomas and Lauren welcomed their second daughter, Ada James. The couple shared the news on social media the following day, with Thomas writing that her birth “was truly the most amazing thing” he had ever seen.

The photo that Thomas and Lauren shared to introduce Ada was as precious as could be. You can’t help but smile when you look at it!

8. When They Took A Family Photo

In this weeks issue of @people – Lauren, Willa Gray, Ada James and I share a look into our lives as a family of 4. Check it out on people.com PC: @juliepaisleyphotography

Shortly after Ada was born, Thomas and Lauren got some help from People to take family photos with their two daughters. The above photo is the main image they shared, and they honestly could not have picked a better one.

Willa was the star of the moment, and she seemed to know it too. Just look at that smile!

9. When They Got All Dressed Up

In September 2017, Thomas’ dad, country singer-songwriter Rhett Akins, married his longtime love Sonya Mansfield. Thomas, Lauren, and both of their girls were in attendance at the wedding. In fact, Willa actually served as the flower girl!

The whole family was dressed to the nines for the occasion. But although they looked good, Lauren noted that they were all a little bit tired!

10. When They Enjoyed Some Well-Earned Relaxation

Thomas and Lauren are quickly learning what it’s like to be parents to a newborn and a toddler! During one of Thomas’ off days, the two went to “Mamaw and Papaw’s” and brought both of their daughters in tow.

With the kids under the watchful eyes of their grandparents, Thomas and Lauren took the opportunity to sneak in some much-needed relaxation. The resulting photo from that moment is as cute as can be!

11. When They Saw The Eiffel Tower At Night

A year before they entered the journey into parenthood, Thomas and Lauren got the chance to travel over to Europe, and made a stop in Paris, France. While there, the two took what has to be one of the most romantic snapshots they have ever shared with the world.

But Thomas did get to see the Eiffel Tower at night, and he wasn’t alone. Lauren was right there by his side, resulting in a priceless moment they’ll surely never forget.

If these pictures didn’t provide you with enough cuteness for your day, prepare to get all giddy watching Thomas and Lauren’s wedding trailer in the video below!