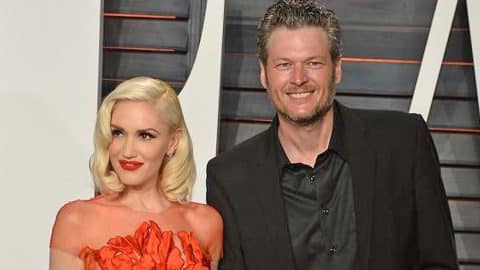 Speculation surrounded Gwen Stefani when she posted a picture on Instagram of a beautiful horse using the hashtag “#bestpresentever”.

Many social media users commented asking if her boyfriend, Blake Shelton, had gifted her with such an amazing present, but neither she nor Blake responded – until now!

Shelton sat down with Entertainment Tonight’s Nancy O’Dell to talk about being the ambassador for a new line of vodka, the upcoming 10th season of The Voice, his mentor for the season, and of course, the horse.

O’Dell casually brought up his “very special mentor” for the season who we all know, is his girlfriend, Gwen Stefani.

He said it was very easy to ask her to be his mentor.

O’Dell made a nice segue and said, “This works out perfectly doesn’t it? I thought, maybe, it was the horse that you gave her?“

He confirmed that he did, in fact, get her that horse!

“I did, I gave her the horse. Actually got her a horse and got myself a horse at the same time,” he tells ET. “Gwen, she loves riding and she loves horses. It’s actually so funny that people are so shocked by that, but if you can name me one girl on the planet that doesn’t love horses or just think that they are beautiful…”

Who knew Stefani loved riding horses so much! Well, now we do!