By Miranda Raye on March 4, 2016
Advertisement 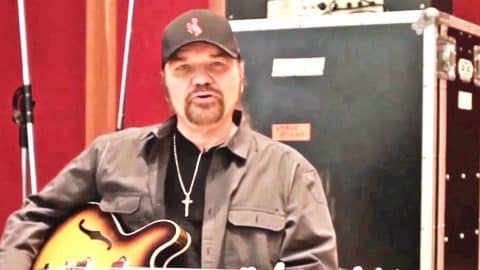 If anyone knows about Lynyrd Skynyrd‘s secrets, it’s definitely Gary Rossington. He’s been with the band since day one, as one of the founding members along with Ronnie Van Zant, Allen Collins, Bob Burns, and Larry Junstrom.

After Skynyrd reunited in 1987, Rossington returned, and today he remains as the only founding member still in the band.

Leading up to the release of Skynyrd’s 14th album, called Last of a Dyin’ Breed, in 2012, Rossington sat down to give fans a behind the scenes look at the band’s recording studio in Nashville. First, Rossington spoke about the city itself, and how much it means to the band.

“We come to Nashville a lot cause it’s like home, a second home to us,” he said. “We’ve been coming here so much and have so many friends here.”

Rossington said that Skynyrd’s Nashville studio is named Blackbird, after the Beatles‘ song by the same title. As it turns out, Rossington and the other members of Skynyrd are huge fans of the British rock group.

“I’m a Beatles freak and we love the Beatles, so it’s called Blackbird after the Beatles, and there’s all these pictures of the Beatles and different equipment they used,” Rosingington said. “Even some of the board in there in the control room, the Beatles used on mastering certain things. It’s just really cool.”

That does sound really cool! How awesome is it that Skynyrd gets to use some of the same equipment as The Beatles?

You can watch Rossington’s full behind the scenes tour in the video below.