Brantley Gilbert Turns His Back To The Audience, And What Happens Next Is JAW-DROPPING!

By Manly Bryant on March 8, 2016
Advertisement 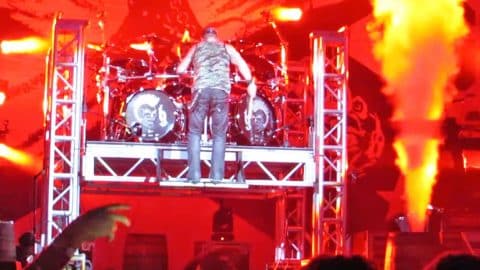 This is enough to make anyone cringe with nerves. Whenever someone attempts a backflip, especially from a significant height, it is scary. Brantley Gilbert is no exception.

The anxiety-inducing video featured below is impressive to say the least. During a show in Indiana, Gilbert was brought up roughly five feet above stage level with his back to the audience. There is no telling whether or not the crowd knew what was about to happen right before their eyes!

The fire, the screams, the clash of the drum cymbal – it’s almost too much to handle.

Suddenly, Gilbert completes a full backflip onto the stage below. The landing wasn’t the cleanest, but he was able to stick it. The crowd burst into a roar, applauding the risky move. Fortunately, had Gilbert not been able to land the flip, there was a safety mat placed underneath him.

This is a video you’ll have to watch over and over (once you know he lands safely). Gilbert proves once again that he is a true country bad a**. We just can’t get enough!

Watch the thrilling backflip below!