By Manly Bryant on March 15, 2016
Advertisement 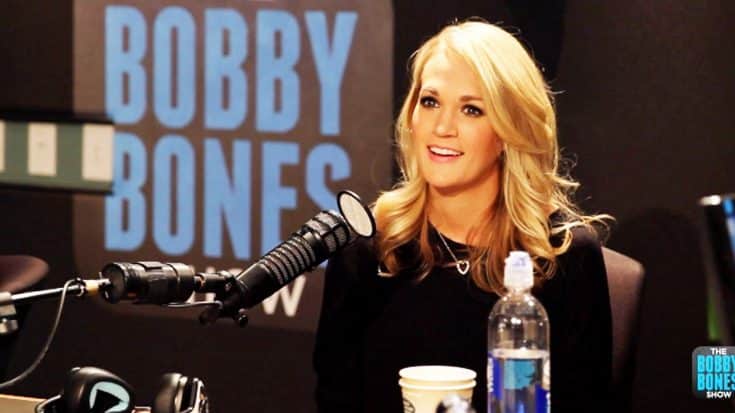 A few months ago, country superstar Carrie Underwood filmed her NHL player husband, Mike Fisher, singing some country jams in the car and decided to share it with the world.

“[Mike] sings all the time,” Underwood tells Country Countdown USA’s Lon Helton. “And sometimes I will film him because he usually doesn’t know the words to anything.”

It turns out that this time, Mike knew all the words to Garth Brook’s “The River”.  As his wife was filming him, the superstar hockey player noticed and gave the performance his all. Once Carrie had posted it, her video caught the attention of a particular country legend…Garth Brooks himself!

“Garth Brooks responded!” she exclaimed to Helton. “He was like ‘Let’s sing together in Nashville when the tour comes there!”

Well, as she continues, the American Idol champion reveals that she’s been one of the biggest Garth Brooks fans since she was 10-years-old and she’s not cool with being second in line to duet with one of her favorites!

“And I said, ‘You cannot sing with Garth Brooks before I do.’  When I was 10 years old I met Garth Brooks and said, ‘If you ever need someone to sing a duet with you, I’m your girl’,” She admitted. “So I’ve been waiting for that forever. And my husband who’s a hockey player is gonna sing with Garth Brooks??  I don’t think so! …I might cry if that happens.”

When Helton suggests that it will be interesting to see who gets to sing with Brooks first, Carrie declares it “a race”!

Who do y’all think will get the first opportunity to sing along side Mr. Brooks??

Watch the video below with Carrie Underwood singing during her current tour covering a hit that Garth loves too – “Fishin’ In The Dark”!