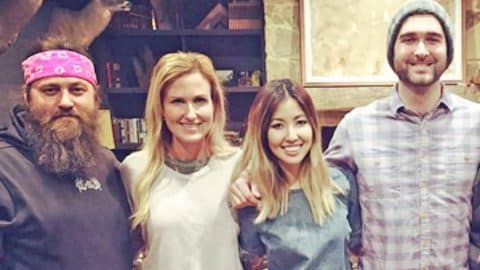 In 2004, Willie and Korie Robertson took in their daughter, Rebecca, as a foreign exchange student from Taiwan.

Ten years later, she was still living with the Robertsons.  Not as a student, but as their daughter. Technically, she is their foster daughter, but the word “foster” doesn’t matter to them. They are family.

She travelled to Los Angeles to complete a fashion internship, which taught her so much that she and Korie opened up their own clothing store in their hometown of West Monroe, Louisiana called Duck and Dressing.

She has appeared on Duck Dynasty starting in Season Five and served as a bridesmaid in John Luke’s wedding.

The two are to be married in a tropical destination wedding.

On Sunday (March 14), Rebecca Shared a photo of her and her fiance at the airport with the caption, “Can y’all guess where we are heading?”

Neck pillows, grande coffee & a sleeping companion, i am all set for a 15 hour flight. Can y'all guess where we are heading?

Fans guessed tropical destinations, since that is where they will be getting married.

Two days later, she revealed that they went to her birthplace of Taiwan.

“Seeing Taiwan in a “slightly” higher view,” she captioned a photo walking through the city.

She also shared a photo of a Taiwanese coffee truck.

We can’t wait to see more pictures from their visit!

What an amazing experience for her future husband to see where she spent the first sixteen years of her life.