By Miranda Raye on March 21, 2016
Advertisement 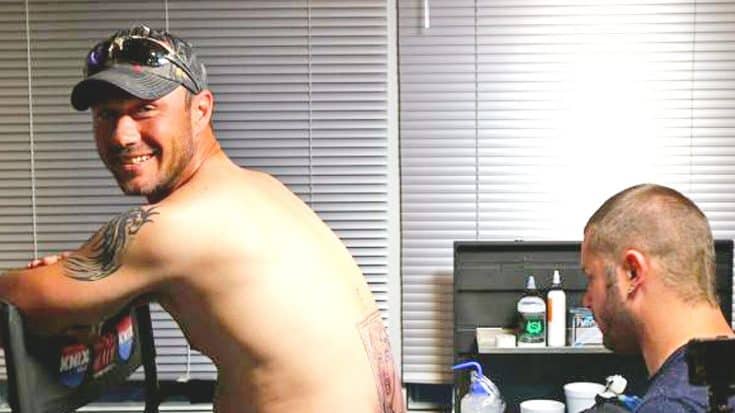 Many of country music’s biggest stars have expressed their support for presidential candidate Donald Trump, including Kenny Rogers and Loretta Lynn. Since so many country stars prefer Trump over any of the other candidates, one Phoenix radio station wondered if country fans felt the same way.

The Ben & Matt Show on 102.5 KNIX decided to ask their listeners if any of them liked Trump enough that they’d be willing to get a “Trump Stamp” tattoo. If someone was willing to rise to the challenge, they would be awarded with a pair of “Country Mega Tickets” to see every country concert in Phoenix.

Three volunteers stepped up, but all of them backed out at the last minute. Just when it seemed like no one was else was interested, one country fan named Travis said he was willing to go for it.

The tattoo is a parody of a “tramp stamp,” which is located on the lower back. Travis’ “Trump Stamp” is literally as described, a picture of Trump on a stamp. When asked if Travis was a Trump supporter, he had a shocking confession to make…he’s not! However, Travis did admit that he doesn’t dislike Trump, he’s just not his favorite.

You can listen to Travis’ interview on the Ben & Matt Show below, when they also call his mother to let her know what’s going on.

What do you think? Would you be willing to get a “Trump Stamp” to see all of your favorite country artists in concert?