52 Years Later, Phil and Kay Robertson Reveal How They Make Their Love Last 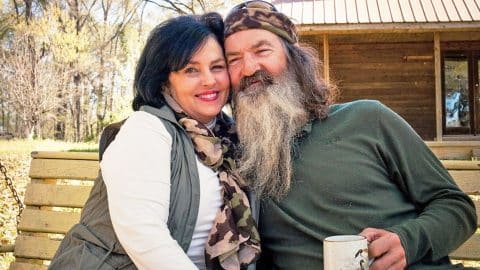 When they began dating, Phil and Kay were your typical Southern couple. Phil was the high school quarterback and Kay was a cheerleader and debutante.

The two married young, had four sons, Alan in 1965, Jase in 1969, Willie in 1972, and Jep in 1978. They eventually went on to own a multi-million dollar company centered around Phil’s love for duck hunting. Phil and Miss Kay in their dating days. (via A&E)

Displeased with the ducks calls available to him at the time, Phil set out to invent a better call and invented his first Duck Commander call in 1972.

After Kay and Phil had Alan, Phil began drinking and his violent temper surfaced. There were instances where he became physical, but Kay still fought for their marriage.

“I’m a loyal person,” she explains. “When I made the vow to God, for better, for worse, ’till death do you part.”

After a few more drunken nights, Phil kicked Kay, Alan, Jase, and Willie out. Of the painful memory she says, “I told my kids, ‘Your dad has a good heart, but the devil is controlling him right now’“.

Three months later, Phil came to his senses, gave up drinking, became a Christian and worked on putting his family back together. A few years later they had their youngest son, Jep.

Phil has since become outspoken about his faith, and his love for his family, especially his wife.

Watching Duck Dynasty, it’s hard to imagine them anything different than how we know them now, but it’s because they went through all their hard times that they are the amazing people they are today.

In a 2013 episode of Duck Dynasty, the Robertson sons and their wives put together the wedding ceremony Phil and Kay were never able to have.

They exchanged vows in a beautiful ceremony in their backyard and Miss Kay summed up their marriage in the most amazing way.

“Our marriage is living proof that love and family can get you through anything,” she said.

Watch their beautiful vow renewal below.