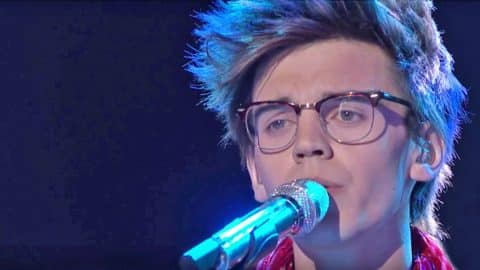 Next week, we will bid adieu to American Idol after 15 seasons.

The shortened farewell season will send three singers to the finale, unlike the usual two and host Ryan Seacrest announced an elimination in the middle of the episode.

During Thursday night’s episode (March 31), the four remaining singers had the opportunity to sing three songs: One dedicated to their hometown, one chosen by mentor and President of Big Machine Records, Scott Borchetta, and one chosen by the judges.

As he stood center stage and accompanied himself on guitar, Bourg sang a beautiful rendition of the song, originally released in 1984. He really showed off his unique tone and style, and received a standing ovation from fellow contestants.

While the performance was incredible and received high praises from all three judges, it was not enough to secure Bourg a spot in the finale. After the hometown round, he was eliminated, which means Dalton Rapattoni, Trent Harmon, and La’Porsha Renae are moving on to the finals.