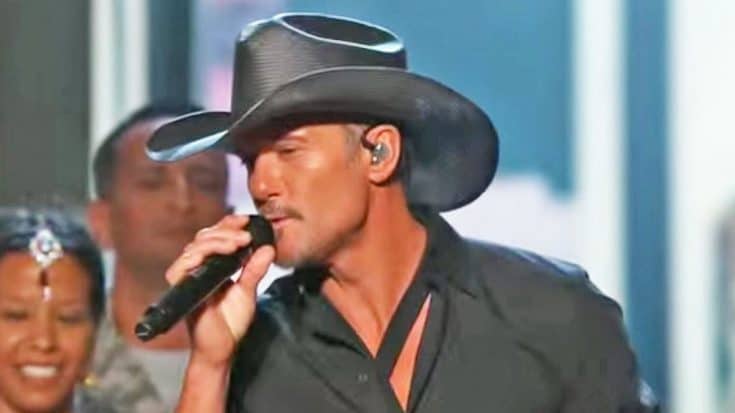 Tim McGraw‘s inspirational new single, “Humble and Kind” has touched hearts around the world. After the song’s release, McGraw found himself overwhelmed with messages and photos from his fans, showing ways that everyday people are continuing his message of being “Humble and Kind.”

McGraw happily shares these stories and photos, and for the ACM Awards this year, he asked fans to send in even more photos so he could use them during his performance of the song. Fans from all over sent in their photos, while holding up a sign with a word or phrase written on it that showcased what “Humble and Kind” means to them.

Those who tuned in to the ACMs on Sunday night (April 3), expected to see all of the touching photos sent in by McGraw’s fans, but he kept one major part of his performance a surprise.

McGraw started off singing on a small stage in the middle of the crowd. The room was almost completely dark, with the exception of the light coming off of the audience’s glowing “Humble and Kind” bracelets.

Once the lights turned up, a series of people started walking down the aisle and up to the main stage. Soon, McGraw was joined on stage by a large group of people of all ages, nationalities, careers, and backgrounds. Since “Humble and Kind” is a song that has truly united people from all over the world, it was an inspirational moment to see so many people from different walks of life join McGraw on stage.

You can tell that McGraw and the entire crowd was moved by the performance, and if you’re anything like us, watching it will bring tears to your eyes.

We’ve seen McGraw perform at the ACMs many times, but this performance is definitely one of our favorites.