By Manly Bryant on April 5, 2016
Advertisement 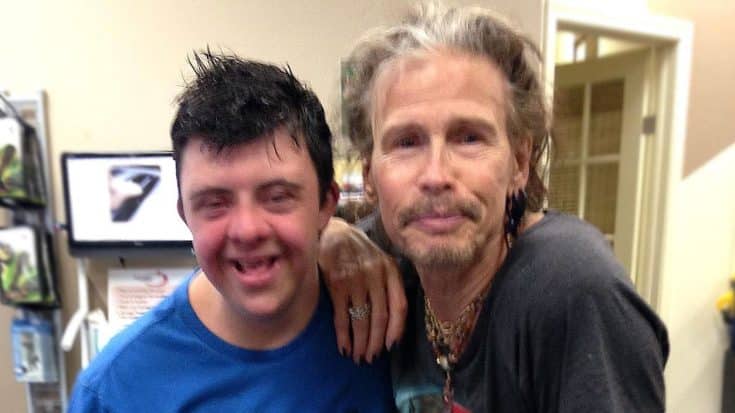 One of Steven Tyler’s biggest fans, Anthony Yorfido, had been trying to get tickets to the upcoming shows in a nearby town, but had been unable to because both dates were sold out well in advance. He simply figured he had missed his chance.

Anthony, born with Down syndrome, and a huge Aerosmith fan got an incredible second chance during what appeared to be an ordinary trip to the store.

Late in the afternoon, Anthony and his mother Diane Yorfido stopped by a Niagara Falls medical supply shop for a few items. Nothing seemed out of the ordinary except for a limousine parked out front.

When Diane spotted the figure at the counter, he looked familiar, but she couldn’t quite place where she knew him from. That’s where Anthony’s time as an Aerosmith fan came in.

“Oh my God! Steven Tyler, is that you?” she recalled her son saying in an interview.

Anthony dashed over to the rock-gone-country star to give him a hug. Tyler hugged both Yorfido’s and inquired if they were going to be attending his show that evening.

Anthony Yorfido is a huge Aerosmith fan – and by complete chance, he met Steven Tyler in a drugstore! https://t.co/7NYC7mUQmp pic.twitter.com/vePmGx82Db

After Diane informed him of their struggle to find tickets, the superstar told them “Oh don’t worry about that, you guys are coming with me! I’ll get you backstage passes.”

But that wasn’t the end of this magical chance encounter with Anthony’s favorite artist. Shortly after Steven Tyler took the stage that evening, he even had Anthony brought out on stage to play the maracas during “Sweet Emotion” and shouted “Anthony’s in the house!”

What an incredible story of a dream come true for this youngster!

Watch the video of Anthony Yorfido playing alongside Steven Tyler below!