Tim McGraw Admits His Oldest Daughter ‘Doesn’t Listen’ To Him

By Jennifer Pernicano on April 5, 2016
Advertisement 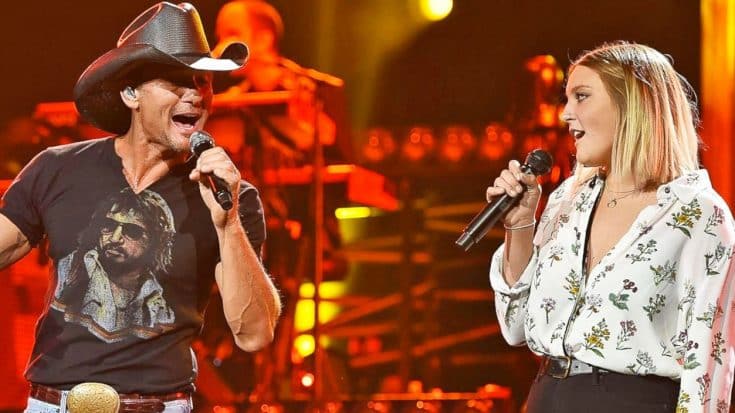 It’s no surprise that Tim McGraw surrounds himself with wonderful women. He doesn’t have a choice!

Between his wife, Faith Hill, and their three daughters, Gracie, Audrey, and Maggie, McGraw is definitely outnumbered, but he doesn’t mind at all.

He is so proud of all of his daughters’ accomplishment and is their biggest fan at whatever they do. Gracie, the oldest, recently went off to college and also began her singing career.

She is so talented that McGraw included her on a song off his most recent album, Damn Country Music. Together, they sing the track, “Here Tonight“, which Gracie has performed with her dad onstage at a concert.

On the ACM Awards red carpet, McGraw was interviewed by Entertainment Tonight and asked if Gracie is taking his advice on starting her music career.

“No, she doesn’t listen to dad,” McGraw said, with a chuckle. “She’s way more talented than I am, anyway. She doesn’t need any advice from me. She’s so bubbly and she fills up a room when she walks in. She’s got so much talent and is such a great songwriter, we’re going to hear from her down the road, for sure.”

Such a great Dad answer! Young girls rarely listen to their dads because, let’s be honest, they’re almost always just going to embarrass you.

Watch his interview below.

And take a look at his duet with Gracie below.