By Jennifer Pernicano on April 7, 2016
Advertisement 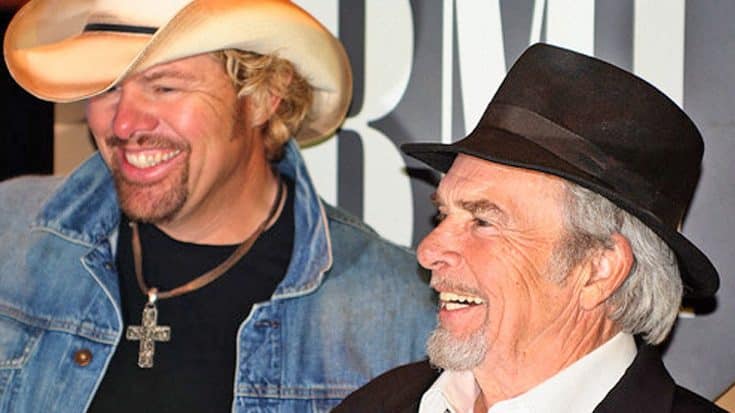 As the country music world is mourning the loss of Merle Haggard, stories surrounding his final days have surfaced and they are so touching.

Haggard was forced to cancel shows when he was diagnosed with double pneumonia in December 2015. He postponed his January concerts as well when the pneumonia returned. His publicist then made a statement saying Haggard would not perform any concerts in February, so he could recover, but he mustered up the energy to play a couple that month.

One concert he felt the need to perform was his February 6th show at the Mandalay Bay Ballroom in Las Vegas.

Actor W. Earl Brown was in attendance and witnessed something amazing backstage. He shared the touching story on Facebook.

“It was Super Bowl weekend. Merle had already cancelled months of shows, but this particular booking was a big payday. Merle had to pay his band and crew, so there was no calling in sick for this gig.

Toby Keith was in town with his wife to watch some football and have some fun. Toby got word that Merle was in Vegas, so he went to see him… Merle was in bad shape. He needed to be in a hospital – not on a stage; but The Show Must Go On. Merle would not take charity from anyone, but he did turn to Toby and say, “How many songs of mine do you know?”

“Well, stay nearby.” After four or five songs, Merle’s infected lungs were spent. He couldn’t draw enough air to sing any longer. “We’ve, uh, we’ve got a special guest here tonight…” Toby came out and sang the rest of the show. Merle gave his last concert. The Strangers got paid. And the audience, while not realizing it at the time, saw something special.

Never speak ill of Toby Keith to me; thanks to him, Merle exited the stage with his dignity intact.”

On Wednesday (April 6), Keith shared a photo of him and Haggard from that night.

“The greatest singer songwriter of my lifetime is gone,” he said. “Thanks for the music and friendship. R.I.P. Hag“.

The greatest singer songwriter of my lifetime is gone. Thanks for the music and friendship. R.I.P. Hag – T pic.twitter.com/Dncf3mmSdF

Watch Haggard and Keith perform “Ramblin’ Fever” and “Sing Me Back Home” below.

While Haggard did go on to play at least three more shows (Feb. 10, 11 and 13), we aren’t certain how many concerts he performed after the Las Vegas show.

Haggard finished that show strong, and told the audience, “I love this guitar even more than God loves the poor, but I love you even more.”

Watch Haggard and Keith perform “Okie From Muskogee” at the Vegas show below.