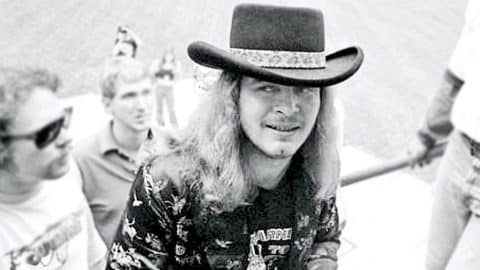 In addition his vocal talent, Lynyrd Skynyrd‘s lead singer Ronnie Van Zant was also a gifted songwriter. As the main lyricist for the group, Ronnie penned some of the most iconic songs in the history of Southern rock, including “Gimme Three Steps,” “That Smell,” and “Free Bird.”

During an interview with radio DJ Jim Ladd on his program Innerview in 1976, Ronnie spoke about his songwriting process. He admitted the writing itself isn’t hard to do, but the difficult part is getting started:

After working on his songwriting for so long, Ronnie said that ideas came to him pretty easy by then. Sometimes, the ideas would even come to him at random, when he was least expecting to write a song.

For some reason, there was one particular place that Ronnie was able to come up with a lot of ideas, and he revealed to Jim that he actually wrote one of Skynyrd’s greatest songs in that place.

Wow! We’d say we can’t believe it, but knowing how talented Ronnie was, it makes sense that he would come up with the idea for a historic rock song in some place as simple as the shower.

Ronnie goes on to share more about Skynyrd’s songwriting process throughout the interview, which you can enjoy listening to below.