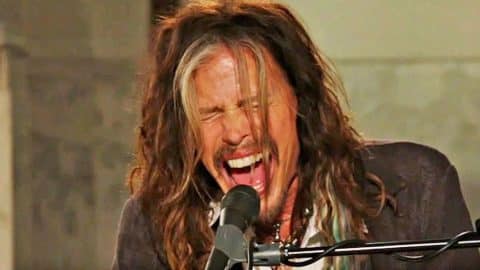 April 15, 2013 is a date deeply ingrained in the minds of those in Boston, and the country as a whole. On that day at 2:49 PM, two pressure cooker bombs exploded near the finish line of the Boston Marathon, killing three and injuring over 260 more.

A year after the bombings, ESPN put together a televised special called Dream On: Stories from Boston’s Strongest to honor the victims. The highlight of the night was a performance from Aerosmith frontman Steven Tyler, who performed a stirring rendition of the band’s song “Dream On” along with guitarist Joe Perry.

Seated in front of a large piano, Tyler belted out the lyrics to the song, which is considered one of Aerosmith’s signatures. The Southern California Children’s Chorus joined Tyler and Perry on stage, and sang harmony to Tyler’s haunting voice.

As you watch and listen to Tyler, the emotion he put into the performance is clear as day, and for good reason. Aerosmith shares a close personal connection to Boston, since the group was formed in the city in 1970.

In an interview with ESPN, Tyler spoke about the song, and how even though he wrote it over 40 years prior, it had great relevance to the Boston Marathon bombings, “It’s almost like it was written for this unfortunate event,” he said.

Although we’ve heard Tyler sing “Dream On” many times before, it takes on a whole new meaning in his emotional tribute performance. You can watch it in the video below.

We couldn’t think of a more proper or beautiful way to honor the victims of such a terrible tragedy.