By Jennifer Pernicano on April 18, 2016
Advertisement 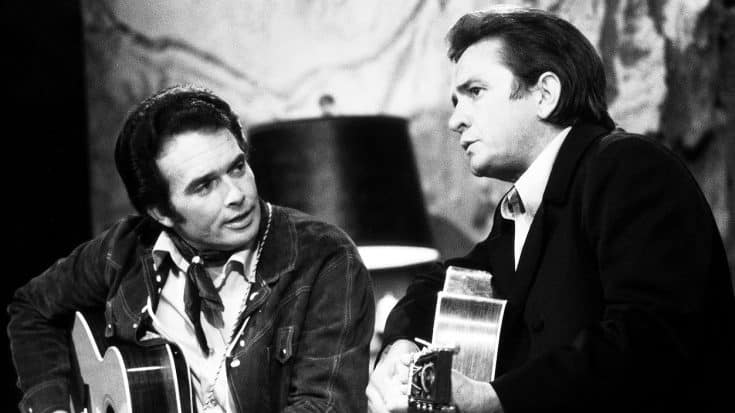 Many people have heard the story of Merle Haggard’s early years. He was born into poverty and raised in a boxcar.

After his father passed away, he began to rebel, which led him to jail. He escaped 17 times before he was transferred to San Quentin Prison, where he saw Johnny Cash perform. The performance inspired him to clean up his act and become a country singer.

Of course, we all know how that story ends. He became arguably the best singer-songwriter of all time, with 38 No. 1 singles, helped grow the outlaw country movement and left an incredible legacy behind when he passed away on his 79th birthday earlier this month.

With friendships spanning multiple decades with fellow country singers such as Willie Nelson and Kris Kristofferson, we have heard so many wonderful stories about The Hag.

An incredible story that only he or Johnny Cash could tell might just be our favorite.

In an interview with Vanity Fair in 2010, Haggard tells the story of the very first time he met the legendary Johnny Cash, and it was in a men’s restroom of all places!

In 1963, the two singers were both appearing on the same TV show in Chicago. Haggard went to the restroom and lo and behold, Cash was occupying the urinal next to him.

“Then I heard him say, ‘Haggerty, you ever do anything like this?’ And I looked and it was Johnny Cash and he had a pill in his hand,” he recalled.

Haggard revealed they did take the pills together, which turned out to be Dexedrine, a pill used to stay awake, and washed it down with Cash’s flask of wine.

“Back in those days, everybody took ’em,” Haggard said. “The preachers took ’em!”

Haggard and Cash then reminisced about the San Quentin performance, and Cash said, “I don’t remember you playing at that show, Merle.”

Haggard had to explain to him that he was actually a member of the audience.

From that day forward, Cash always told Haggard, “You’re everything that people think I am.”

Haggard and Cash went on to become extremely close friends. “I think we would’ve killed for each other,” Haggard said.

Take a listen to an incredible Haggard/Cash duet, “Sing Me Back Home”, below.