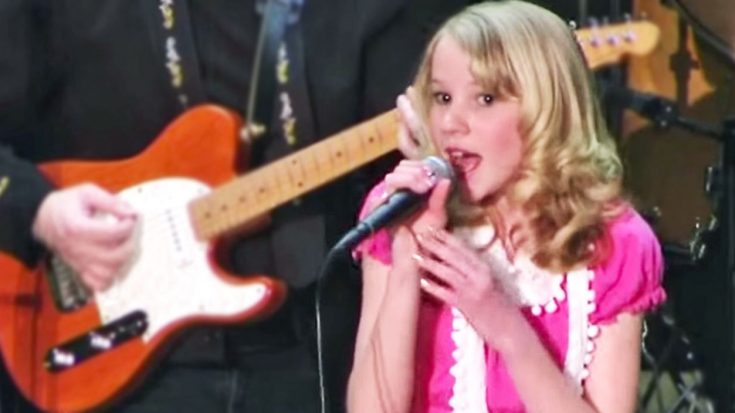 Loretta Lynn is the queen of writing sassy country tunes. There’s no shortage of them in her catalog, with one of the most fiery being her 1965 song “You Ain’t Woman Enough (To Take My Man).”

As she often does, Lynn drew on a real-life experience to write “You Ain’t Woman Enough.” Speaking to PBS, Lynn explained how the song came to be because of a woman she once met at a show.

This woman came up to Lynn and told her that another woman was trying to steal her husband away from her. The “other woman” happened to be out in the audience, and when she was pointed out to Lynn she exclaimed, “Honey, she ain’t woman enough to take your man!”

That encounter prompted Lynn to write her now-iconic song, which is considered to be one of her signatures. It has been covered by countless singers since then, including one talented 12-year-old.

Country cutie Paige Rombough may be small, but she’s got a big voice! Not only that, but her voice has that twangy, classic country sound, reminiscent of Lynn’s. It’s a tone that country fans go crazy for, and the crowd certainly loved Rombough’s performance!

Plus, Rombough did an expert job at channeling Lynn’s sassiness. We have to applaud her for being so confident at such a young age.

Tune in below to watch this talented young girl’s performance of one of Lynn’s biggest hits. If you love what you hear, check out her cover of “Coal Miner’s Daughter” as well!