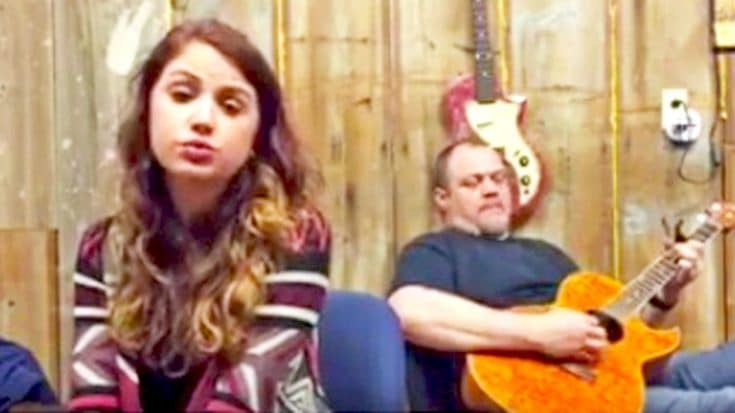 Out of Dolly Parton‘s immense catalog of hit songs, no other has been covered as many times as “Jolene.” As Parton shared in an interview with NPR, the song has been recorded by over 30 artists, and has even been translated into other languages.

When “Jolene” was released in 1973, it claimed the top spot on the Billboard country chart and also reached the 60th spot on the pop chart. After Parton performed the song at the Glastonbury Festival in 2014 it entered the charts for a second time, something that rarely happens in the music world.

For Parton, it’s easy to see why “Jolene” is so beloved by country fans.

“It’s a great chord progression — people love that ‘Jolene’ lick,” she said. “It’s as much a part of the song almost as the song. And because it’s just the same word over and over, even a first-grader or a baby can sing, ‘Jolene, Jolene, Jolene, Jolene.‘”

One person who can definitely sing “Jolene,” and do it well, is 25-year-old Alexandra Kay. The aspiring country pop artist has generated a huge following over the years, and even made it to the third round of American Idol in 2011. Since then, she signed a record deal, released her first single, and continues to amaze her fans with her country covers.

Alexandra performed a simple, stripped down version of the song, which gave the chance for her voice to shine. Her voice has a pure country sound, and sometimes when she hits a certain note, she sounds a bit like Parton herself.

There are a lot of “Jolene” covers out there, but Alexandra’s has quickly found its place in our hearts as one of our favorites. Many others must have felt the same way, because as of April 28, 2016, Alexandra’s “Jolene” cover has over 10 million views.

We think Alexandra did a stunning job singing “Jolene,” and we’re sure Parton would feel the same!