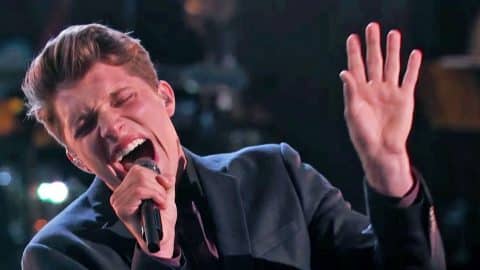 22-year-old Michigan resident Daniel Passino has made a return to NBC’s 10th season of The Voice, but will his latest performance be enough for him to stay?

Eliminated once before during the “knockout rounds”, Passino left the show only to return several shows later as coach Pharrell William’s “comeback artist” to compete in the Live Playoffs.

His recent performance has been hailed by some and criticized by others, but the answer is still out there to the question we all want to know: “Will he be eliminated AGAIN?”

Trying to turn up the heat on the other contestants, Passino takes to the stage with an interesting rendition of Aerosmith’s “I Don’t Want To Miss A Thing” which was originally sung by frontman Steven Tyler.

Many criticize Passino because he doesn’t replicate the same style as Steven Tyler, and on the other hand some people are raving about it because it’s more reminiscent of Mark Chesnutt’s country cover.

Watch the full performance below and let us know what side of the fence you’re on in the comments!