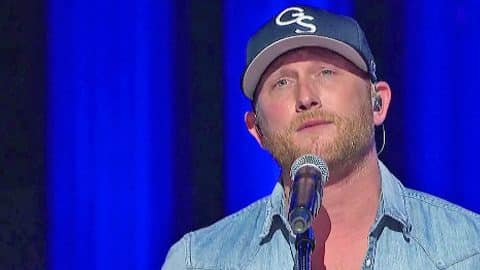 Cole Swindell suffered a terrible loss when his father died unexpectedly on September 2, 2013.

His father was able to celebrate his son’s success when he signed a recording deal with Warner Music Nashville, but sadly, hardly anything else.

Swindell’s debut single, “Chillin’ It”, was released less than a month before his father’s death and his debut album dropped five months after.

In April 2015, he won the ACM Award for New Artist of the Year and now had a No. 1 song, and headlined his own tour.

So much was happening in Swindell’s life that he wanted to share with his father, but couldn’t, so he wrote “You Should Be Here” with award-winning songwriter Ashley Gorley.

It quickly reached the No. 1 spots on the Country Airplay and Hot Country Songs charts and is a song for everyone. His powerful music video, which featured a phone call with his dad, has been viewed over 16 million times on YouTube.

An incredibly emotional moment came when Swindell performed the song for the first time on the Grand Ole Opry stage on April 26.

As he walked on stage, he looked to the sky, held his heart, and took a few deep breaths before he began singing.

“That song goes out to everybody here that has somebody that should be with us tonight at the Opry,” he tells the audience.

His father was definitely in the audience that day. Watch the performance below.