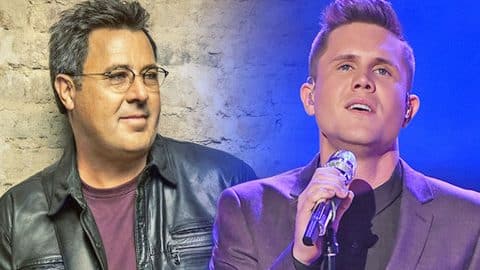 Oh, the power of technology!

During one of his first online concert, he performed 30 minutes worth of incredible music from Bob Marley’s “No Woman No Cry” to John Mayer’s “I’m Gonna Find Another You” to Tom Petty’s “Free Fallin'”.

He also sang some country classics, which further indicate that he might actually be recording a country record!

About halfway through, he begins playing Vince Gill’s classic tune “Whenever You Come Around”.

Harmon shows off his ability on the guitar as he accompanies himself on every song, each requiring a different style of playing.

Gill’s song requires a lot of emotion, which Harmon showed with his subtle vocal runs, passionate guitar playing and you can tell he is truly enjoying himself.

He follows “Whenever You Come Around” with a song he performed on Idol, “Tennesee Whiskey”.

Harmon recently released his very first single, the Keith Urban-penned song “Falling” and it is already rising on the charts. He’s working on his debut album with his new record label, Big Machine Records and we can’t wait to see what he has in store for us.