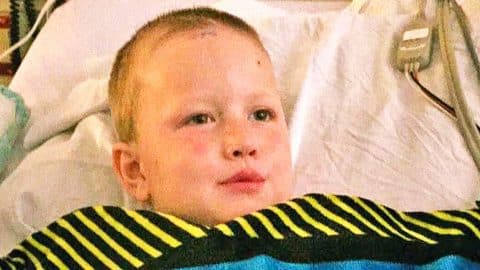 At six years old, Layton Carr is already Luke Bryan‘s biggest fan. He’s always dreamed of being able to see the “Huntin’, Fishin’, and Lovin’ Every Day” singer in concert, so when he found out Luke was coming to town on his Kill the Lights Tour, he was thrilled.

Sadly, Layton is no longer able to attend Luke’s concert on Wednesday (May 18) in Bossier City, Louisiana. That’s because on Friday morning (May 13), Layton underwent surgery to remove a brain tumor.

Layton’s family learned only a week beforehand that he had a grape-sized tumor on his brain, which doctors decided to remove. A Facebook page was set up in his support to keep people filled in on his journey called Layton’s Warriors. Following his surgery, Layton’s mother, Natalie, shared that the doctors removed the entire tumor and he is doing well.

Since Layton will miss Luke’s concert, his dream to meet him is stronger than ever. News Radio 710 KEEL reports that a family friend stepped up to help make Layton’s dream come true. Brandy Ashing Frost shared a post to Luke’s page, asking him if it would be at all possible to stop by and pay Layton a visit.

“Do you think maybe, just maybe, in your insanely busy schedule, that you could go see him in the hospital?” she wrote.

Layton’s story caught the attention of Pay It Forward Networking, who is also trying to get Luke’s attention in hopes he’ll make Layton’s dream come true.

On Sunday, Brandy shared on the Layton’s Warriors Facebook page that the response to her initial post has been overwhelming. More people are sharing Layton’s  story, and although Luke hasn’t responded yet, he’s sure to hear about it soon.

You can do your part by spreading the word about Layton’s dream. There’s also a GoFundMe account set up to help cover some of his medical costs, which you can visit here.

We know that Luke has a huge heart, so if he hears about Layton, we have no doubt he’ll help make his dream come true.