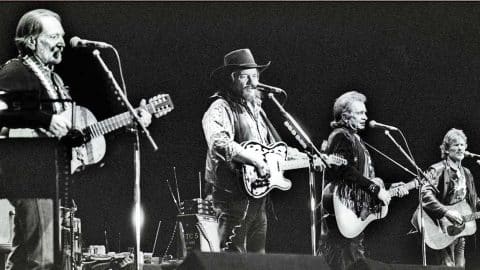 As the country world mourns the loss of Grammy Award-winning singer-songwriter Guy Clark, it’s always nice to remember them for the legacy they left behind.

He became quite close to the outlaw country group The Highwaymen, consisting of Kristofferson, Johnny Cash, Waylon Jennings, and Willie Nelson, and was often called “The Fifth Highwayman”.

The band covered one of his most famous songs, “Desperados Waiting For A Train”, and re-introduced it to a new generation.

“Desperados Waiting For A Train” was written by Clark and originally recorded by Jerry Jeff Walker for his 1973 album Viva Terlingua. Tom Rush and Rita Coolidge each recorded a version for their 1974 albums Ladies Love Outlaws and Fall Into Spring, respectively.

Clark finally released his own version for his debut LP in 1975. It was inspired by his grandmother’s longtime boyfriend, Jack, who was a grandfather figure to him.

The Highwaymen released their version in 1985 and it became a hit. They played the song at 1993’s Farm Aid to a sold-out crowd.