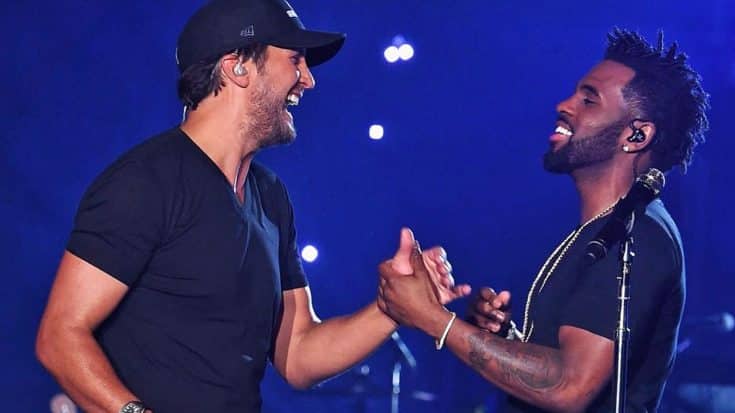 With a setlist of chart-topping singles from both artists, Luke Bryan and Jason Derulo’s CMT Crossroads concert was one of the most-anticipated crossover performances in recent history.

During an interview with The Associated Press, the R&B and pop musician reveals that country music holds a very special place in his heart.

But just how deep does that love run?

From their quick-witted banter and great humor, it shows that the two are fast friends and have obviously had an impact on each other – maybe even a big enough one to influence a crossover record!

“It’s always cool to get another perspective,” says Derulo of witnessing Luke’s take on his songs. “You have your ways, you get used to your ways and somebody else supertalented comes in and does it a different way and you’re like, ‘Oh, I haven’t really thought about it like that.’ So it’s been a cool little revelation of some other routes you can take.”

Even Luke admits that there were new elements brought into his songs by Derulo, and says that he’ll “probably add it into [his] shows”.

With all this genre-mixing prompting a lot of creativity, what kind of impact did it have on Derulo? Well, he might be taking a shot at a country album in the future…

“I love [the] different melodies and I love the storytelling that country [music] has. If I were able to flip that and bring that into my world, it would be fresh and new.”

After seeing these performances from CMT’s show, it’s clear that he has the talent to create stunning music no matter what genre he’s singing!

What would you think of a Jason Derulo country album?

Check out one of their stunning duets in the video below and let us know what you think in the comments!