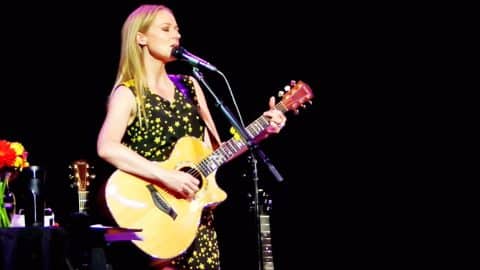 Most people don’t realize that the famed hit by the late Johnny Cash was actually written by his beloved wife, June Carter Cash in the early 1960s and later recorded by him.

In the 2013 biopic of the same name, exquisitely talented musician, Jewel, played the role of Ms. June Carter in her younger years performing alongside her family members in their group, The Carter Family.

Just a few weeks before the film’s release, Jewel took the stage at the Arena Theater in Houston, Texas and gave the audience a performance to remember with a stunning new rendition of the classic Man In Black tune.

Reminiscing on the time she was blessed with the experience of opening for Johnny and June in the late 90s, Jewel opens up to the crowd about meeting June during their concert and what a great experience portraying her was.

Watch Jewel deliver one of the most heartfelt renditions of “Ring of Fire” that we’ve ever seen in the video below!