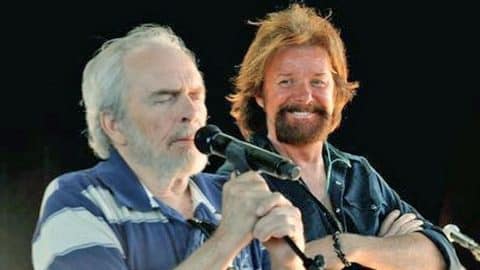 Fans of Ronnie Dunn will know that he is a huge Merle Haggard fan. Several years ago, his wife, Janine, gifted him with a Haggard Telecaster guitar for his birthday. She even got it signed by The Hag.

In the late 1990s, Haggard flew to Nashville to perform for Dunn’s birthday party, and the only way Dunn knew how to repay him was through music.

After two years of writing, Dunn finally came up with the perfect tribute song for his idol, appropriately titled “Hey Haggard,” and released it in time for the legend’s 76th birthday. Three years later, Haggard passed away on his 79th birthday.

In the song, Dunn tries to reference as many Haggard songs as he can and he challenges fans to try to count how many he included!

“His lawyers will probably do that!” Ronnie told The Boot. “I tried to come up with every song title that I could.”

The titles range from “Misery and Gin” to “That’s The Way Love Goes” to “Mama Tried” and everything in between.

Listen to the song below! How many Haggard song titles can you find?