Martina McBride Gives Steven Tyler The Surprise Of A Lifetime! 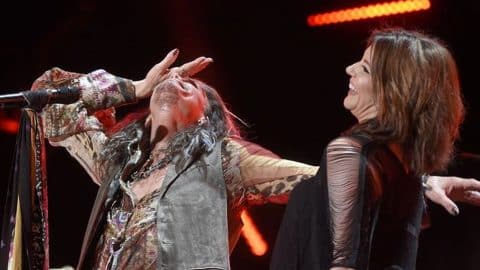 Taking the stage in Nashville during 2016’s CMA Fest the rockstar-gone-country got a surprise from one of country music’s legendary female performers!

Known for her seemingly endless string of chart-topping singles, Martina McBride definitely has become a force to be reckoned with and in one fell swoop she gives the Aerosmith-frontman a surprise that left him delighted!

Beginning to sing one of Aerosmith’s fan-favorite super-hits, “Cryin'”, Steven Tyler waves to the massive crowd of fans, when Martina appears on the opposite side of the stage! This was a performance that nobody saw coming!

These two delivered a fiery-hot rendition of the 1993 power ballad that left every single audience member breathless!

The once-in-a-lifetime moment brought the fans, Martina, and Steven even closer than before and was a great way to celebrate the upcoming launch of his first solo country album, We’re All Somebody From Somewhere!

Watch this amazing duet between Martina and Steven in the video below!