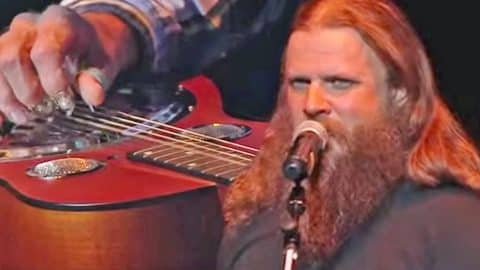 Lynyrd Skynyrd has developed a reputation as one of the greatest rock bands of all time. Their legacy is already immense, and after decades of cranking out rockin’ music, they show no signs of slowing down any time soon.

Because Skynyrd is such a huge part of music culture, it’s no surprise that many modern artists of various genres look up to the group as a source of inspiration. One such artist is country singer Jamey Johnson, who joined other major stars to honor Skynyrd in a huge way.

On November 12, 2014, Skynyrd headlined a concert at the Fox Theatre in Atlanta, during which other artists of multiple genres stepped up on stage to perform their own versions of the group’s classic songs. Jamey was one of those artists, and he ended up singing a cover of a song called “Four Walls of Raiford.”

Written by late lead singer Ronnie Van Zant and Jeff Carlisi, “Raiford” wasn’t released until after the plane crash of 1977 that claimed Ronnie’s life along with those of Steve and Cassie Gaines. The track was first included on the posthumous compilation album Legend, which was released in 1987. Legend contained previously unreleased demos the band had recorded before the crash, including “Raiford.”

Jamey stayed pretty true to the way Ronnie originally sang “Raiford,” maintaining the bluesy feel that gives the song it’s character. The song’s lyrics portray a detailed story, but Jamey embraced the role of storyteller completely, singing each word with the exact amount of emotion needed.

The crowd exploded with cheers and applause at the end of Jamey’s performance, making it obvious they enjoyed his version of Skynyrd’s song. Check out his cover of “Raiford” in the video below and let us know what you think!