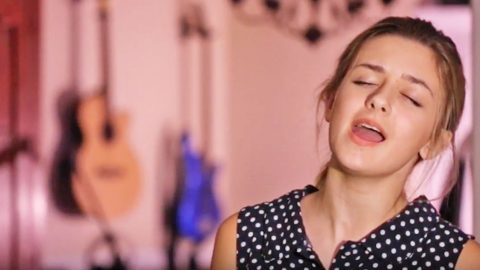 Recording “Blue” for her debut album when she was only 13 years old, LeAnn Rimes transformed the Billy Mack-written song into an instant classic. Since the song’s 1996 release, the critically acclaimed country song has been covered a multitude of times by artists of all walks of music, including an incredibly talented 14-year-old.

The young talent, Emily, takes an emotional approach to the song, baring her soul through her moving delivery of the lyrics that perfectly encapsulates the pain of the first time you feel your heart break. Only a year older than Rimes was when she recorded the song, Emily’s spot-on delivery of the difficult melody proves she’s a force to be reckoned with.

“Blue” was released as the premiere single off Rimes’ debut album, going on to win a plethora of awards including a Grammy Award for “Best Country song” and a CMA Award for “Song of the Year.” Additionally, the song was a success on an international level, dipping into the Top 40 in Australia, Canada as well as the UK.

You can watch her cover of “Blue” below.