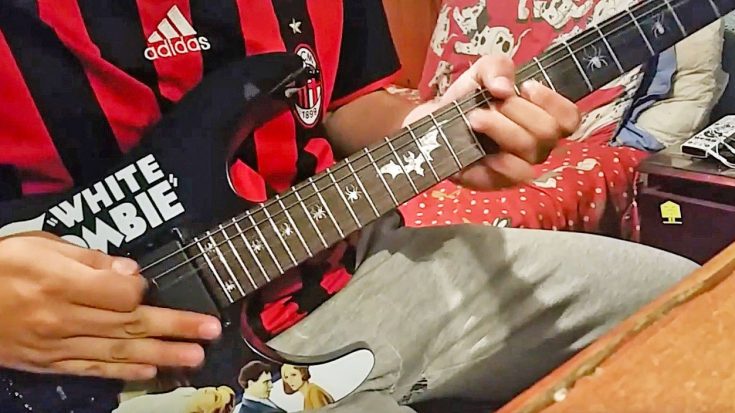 Lynyrd Skynyrd‘s music has managed to inspire millions ever since the group released their debut record in 1973. Their songs are some of few that have been able to transcend time, allowing new generations to learn all about them.

New Skynyrd fans are being born every day, well over 40 years after the band’s debut. Parents and grandparents are teaching their children and grandchildren all about Skynyrd’s best songs, including “The Last Rebel,” “Simple Man,” and of course, “Free Bird.”

One 15-year-old has grown up to develop a love for Skynyrd’s music and a knack for playing it as well. Under the name WhiteZombieGuitar on YouTube, this kid has made his talent clear in a handful of covers on his guitar. Other than Skynyrd, two of the other bands he has covered in the past are Metallica and Europe.

Proving that he has good taste, this kid picked “Free Bird” to play. But he didn’t crank out just any old “Free Bird” cover. No sir, this kid improvised an entire solo to the song!

Improvising takes some serious skill, and can take years to master. Some people think it must be easy to just create stuff on the spot, but such is not the case.

When it comes to improvising on the guitar you need a creative mind and fast fingers. This kid clearly has both, as he tears through his five-minute solo with vibrant enthusiasm. He draws from the guitar jam in “Free Bird,” and manages to pull off some of the signature parts quite well.

Go ahead and scroll down below to catch this kid’s “Free Bird” solo. You have to admit, it’s pretty cool!