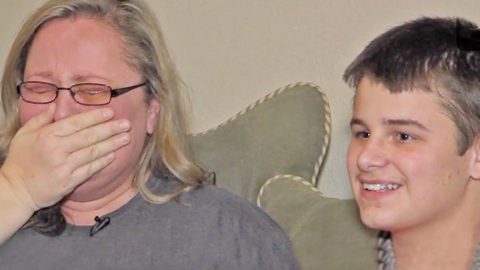 Less then two weeks after sending a letter to George Strait and his team asking for her son to be given a chance to meet his idol, Julie Pair was brought to tears after receiving the answer the her prayers.  The Little Rock “mother on a mission” set up a Facebook page for her son with the sole purpose of gaining attention from the media, and from the looks of it, she did!

Pair’s 15-year-old son, Chase, suffers from a rare birth defect that will inevitably result in a complete loss of his hearing. Chase’s one wish was to hear the voice of his favorite singer in concert before going completely deaf, and thanks to some great people, his wish has finally been granted.

Verizon arena – home to Strait’s Las Vegas shows – teamed up with the country singer’s team to provide them with free tickets to one of his upcoming summer concert while Southwest Airlines offered up a pair of round-trip airfare to get them to and from their destination in style.

“A million thank yous,” said Chase after receiving the news from KATV. “I’m just ready to pack…I’m just happy. I want to go see him.”

“Yes, a million thank yous,” his mother said after bursting into tears. “That is amazing.”

Verizon Arena is currently in the works on setting up a private meeting between Strait and Chase while he’s in Las Vegas.

You can watch the video that started it all below!