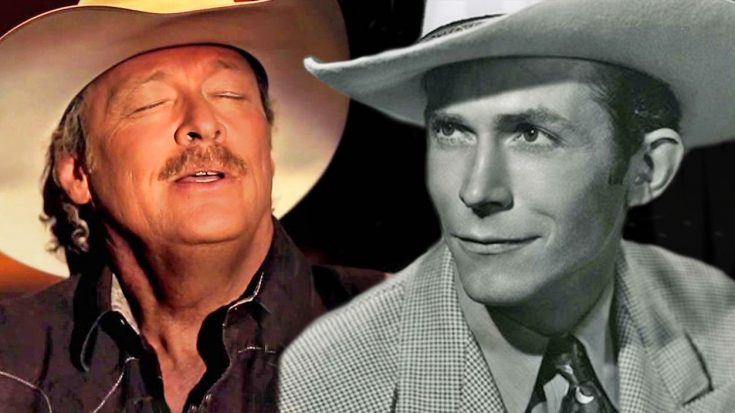 It’s no surprise that Alan Jackson is a huge Hank Williams fan. Jackson covers him often and even wrote a song about him, titled “Midnight in Montgomery”.

It is an ode to Williams, who is from Montgomery and buried there.

65 years ago Hank Williams was pronounced dead at Oak Hill General Hospital in West Virginia after dying in the backseat of a Cadillac, en route to a show in Canton, Ohio. #MusicIsLegend pic.twitter.com/MCK6XM6X0f

The song tells the story of when Jackson stopped by Williams’ grave on the way to a New Year’s Eve show.

His lyrics “A drunk man in a cowboy hat took me by surprise/Wearing shiny boots, a Nudi suit, and haunting haunted eyes,” describe his encounter with the ghost of Williams at the grave.

“Midnight in Montgomery” was released in 1992 as the fourth single from Jackson’s album Don’t Rock the Jukebox. It made it to #3 on the Billboard Hot Country singles charts.

Jackson went on the popular TV show American Music Shop to perform the song and explained the story that inspired it.

“I’m a big Hank Williams fan. About a year ago, I was traveling around visiting radio stations. I ended up in Montgomery, Alabama. I spent the night there. It was the first time I had ever really been there,” he says. “You know, Hank’s buried there and they got a real nice monument over by his grave. late that night I stopped by to pay my respects to Hank and it was kind of a stormy night in Montgomery. It was kind of a strange feeling being there and got back to Nashville and me and a songwriting friend of mine, Don Sampson, we wrote this song as a tribute to Hank Williams Sr.”

The song is dark and haunting, much different from a lot of Jackson’s material, but it is such fitting tribute to Williams. Watch Jackson’s incredible performance of “Midnight In Montgomery” below.