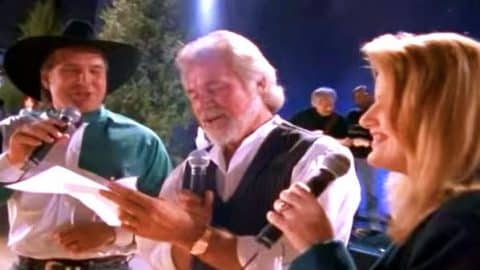 This has to be one of the best throwback Christmas performances we’ve seen so far!

For Kenny Rogers’ TV special, Keep Christmas With You, he enlisted the help of a few different celebrities.

During what looks to be a behind the scenes clip of the night, Rogers let in a few lucky kids to witness a rehearsal with Garth Brooks and Trisha Yearwood for the televised event.

This performance took place in 1995, years before Brooks and Yearwood became one of country music’s favorite couples.

“We’ll show you how the big boys can screw up,” he told the kids with a laugh.

Brooks kicked off the rockin’ performance with a southern twang that led a young girl to mimic him with an air guitar and lip quiver, similar to the one Elvis was known for!

This video must have been taken early in rehearsals because the three singers are still reading the lyrics from a piece of paper!

Their three part-harmony is truly magical and when they sing together, they can’t stop smiling! The upbeat tempo gets our toes tapping right away and makes us want to get up and dance, which is what some of the kids do!

Watch their performance of “The Old Man’s Back In Town” below.