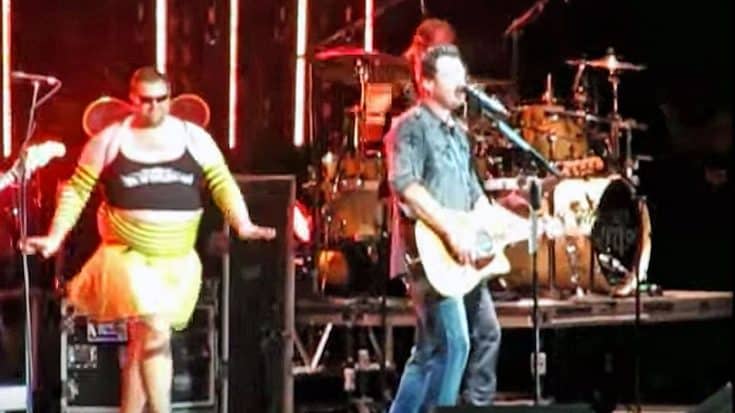 Remember when Blake Shelton toured with Brad Paisley on his H20 II: Wetter & Wilder World Tour back in 2011? As expected, the two went back and forth pulling pranks on each other, but Paisley took home the gold medal with his “Honey Bee” prank.

Like lots of other shows, Shelton performed his hit song “Honey Bee.”

Unlike all the other shows, though, Paisley sent out a robust man hysterically dressed as a bumble bee to sneak up on the unsuspecting singer. Shelton amazingly maintained his composure throughout the remainder of the song all while the bumble bee danced around him.

Another prank Paisley pulled on Shelton consisted of raw chicken placed throughout Shelton’s tour bus which he recalls as the worst prank ever pulled on him.“You couldn’t get onto the bus without throwing up,” Blake said in an interview. “That’s how long it took us to find it.”

Paisley is known for his tour hijinks, as you can see in the videos below, when he pranked The Band Perry and Jewel.

Looks like Paisley’s lucky Shelton has a good sense of humor! Watch the hysterical “Honey Bee” prank in the video below and be sure to let us know what you think in the comments!