By Jennifer Pernicano on October 20, 2014
Advertisement 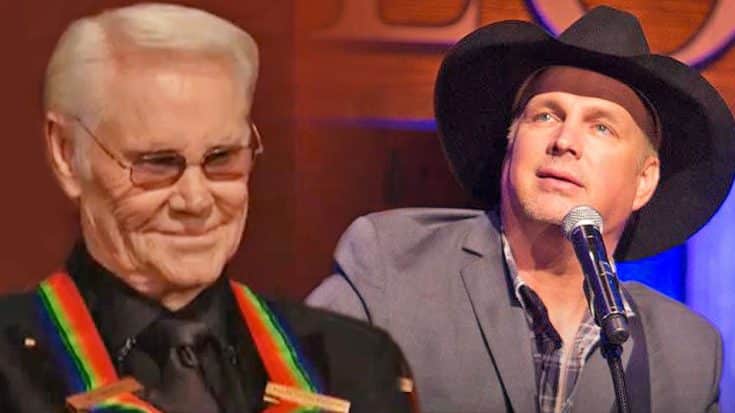 In 2008, country legend George Jones was a recipient of the Kennedy Center Honors, which, according to their website, recognizes recipients “for their lifetime contributions to American culture through the performing arts – whether in dance, music, theater, opera, motion pictures or television – and are confirmed by the Executive Committee of the Center’s Board of Trustees.”

Usually when a musician is an honoree, their peers pay tribute to them with different performances of their most well-known hits. Jones was special in that he had another country legend, Garth Brooks, perform a medley of some of his biggest songs.

Jones looked more excited than anyone to see Garth Brooks perform his songs. Brooks kicked off his performance with “White Lightning”, Jones’ first ever hit. During the hiccup part, Brooks fully commits and actually sounds like he’d been drinking some moonshine, sending Jones into a laughing fit! Jones even glances over at then-President George W. Bush, to see if he is enjoying it as well.

He slowed it down for an emotional rendition of “The Grand Tour”, which almost moved Jones and his wife, Nancy, to tears. Brooks closed his performance with Jones’ 1964 hit song “The Race Is On”. At one point, the camera cut to Jones and President Bush, who were both singing along.

As Garth has said many times, he has a deep appreciation and respect for George Jones and it really comes through in his performance! He ends the tribute by saying, “Simply the greatest voice to ever sing country music, George Jones.”

Watch the entire performance below!