By Jennifer Pernicano on October 21, 2014
Advertisement 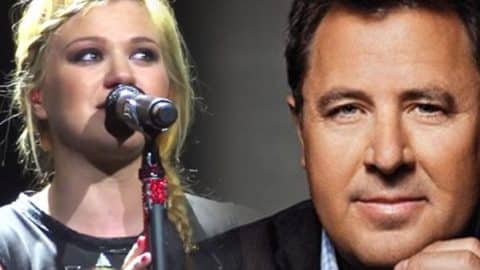 Honoring a dear friend who passed away, Kelly Clarkson became overwhelmed with emotion singing Vince Gill‘s iconic “Go Rest High On That Mountain” dedicated to him.

Clarkson typically gives her fans a chance to make a song request during her live shows while she’s on tour. She has covered songs from every genre, but one of our favorites is her “Purple Rain” cover.

For this particular show, which happened to be the final night of her Stronger tour, the Idol star decided to make a request of her own. She performed “Go Rest High OnThat Mountain” in honor of her guitar player’s uncle – a man she described as a “second father to him” – who had recently passed away.

“We want to dedicate it as well,” said Clarkson before her performance. “One of my guitar players, Aven, over here…unfortunately his uncle, who was like a second father to him, his name was Timmy Banks, I hope I don’t cry! That’s the goal. He passed away unfortunately…Anyway he was a good friend of mine, and he was a good friend of his, so we’re going to dedicate this song to him.”

After pausing for a moment to have a moment with the Lord, Clarkson began singing the powerful lyrics through tears. The camera panned between Clarkson’s masterful performance of the song and her guitarist Aven expertly powering through his grief.

Gill wrote “Go Rest High On That Mountain” in 1995 following the death of his brother. The powerful song went on to earn him two Grammy Awards for Best Male Country Vocal Performance and Best Country Song.

You can watch Clarkson’s tearful performance below.