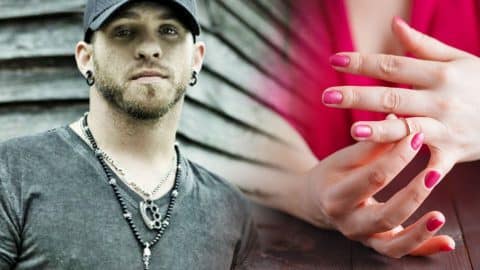 Don’t let his hard-rocking jams and appearance fool you, this country star is not just a one-sided individual and nowhere is that truer than in his own, never-released, ballad that reveals the deep pain he once went through.

"Brandon, buddy, I promise you this. I WILL Make Country Music Great Again." -Brantley Gilberthttps://t.co/KL7CCwJdUu pic.twitter.com/orbheHcavM

One of the best songs ever written by Brantley Gilbert hasn’t actually been included on one of his albums yet but remains a fan-favorite and a true example of his talent for pouring real, raw emotion into a song.

never ever listen to You Promised by Brantley Gilbert bc you will most likely cry. pic.twitter.com/jCenpoNEl4

The song, “You Promised” has been called “a song full of regrets” before and tells the gut-wrenching story of a break up between a couple set to be married that tortures the narrator with each passing day as each person begs the other to stay while more and more revelations come up that push them apart.

“With me, it’s mostly life experiences,” Gilbert said about the song in a 2015 interview. “I try not to write about anything I haven’t experienced….and you know, those songs stand out because you can tell, I think, when I sing that one, that she tore me.”

it's always a good morning if it starts with @BrantleyGilbert and a performance 💃🏼#FridayMorningConversation pic.twitter.com/zcH3My6seK

Traditionally, Gilbert has had lots of powerhouse radio hits that deal with a different side of life and the softer, more exposed, emotional side of him really comes through on this song and, specifically – in the lyrics.

“No baby don’t, you’re making my heart hurt
Don’t say those words
Take it back
You know you don’t mean that
You swore when I wore your ring
It meant forever”

The video below is one that could easily be watched a thousand times over by any country fan and will blow y’all away with Brantley Gilbert’s tremendous emotion.