By Manly Bryant on March 16, 2017
Advertisement 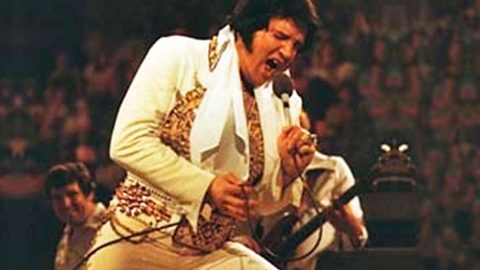 Taking the stage for what would be his very last time performing during a recorded concert, Elvis Presley drew crowds of thousands to the arena and poured his heart and soul out into this song.

While he would perform in concert just a couple times following this CBS Elvis In Concert special, this was one of his final and most notable performances prior to his untimely death in August 1977.

1977 Elvis performed at the Sportatorium, Hollywood, Florida.The crowd was 15500 and Elvis wore Chief suit with the…

Truly one of the most performed and recorded songs in the 20th century, “Unchained Melody” has become a staple in many performer’s acts and has made it onto records of famous artists like The Righteous Brothers, Heart, Cyndi Lauper, Barry Manilow, LeAnn Rimes, and of course – Elvis Presley!

The quite amazing 'Unchained Melody' from the final concert tour in June 1977. What a gifted voice; what a powerful performance.

Presley’s version of the song has become one of the most notable in music history, selling millions upon millions of copies and forever etching his recording as a classic piece of the rising era of rock and roll.

This video does show a side of Elvis Presley that reveals he is ill and not feeling well, but through it all, it doesn’t stop The King from giving this song his all and showcasing his incredible talents on stage.

Watch this must-see final recording of Elvis singing “Unchained Melody” in the video below.