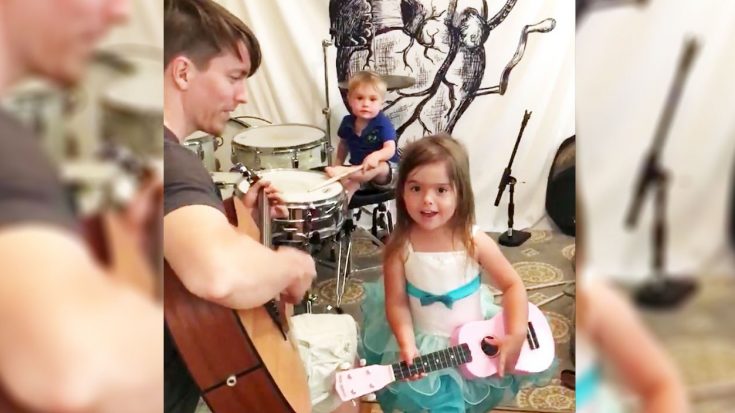 There’s nothing cuter than a musical family getting together for a cover that will easily melt your heart – and this adorable video is exactly that!

Sitting down with his two children in their home studio, Caleb Neff picked up a guitar for a family jam session of a classic country song that will have y’all in tears!

With his daughter, Juni, holding a tiny pink guitar and his son positioned perfectly near a drum, Neff and his adorable family played and sang together to one of John Prine‘s treasured tracks.

As they move through this “family favorite” song of theirs, little Juni adorably conducts her father and brother letting them know when it’s their turn to play or sing.

Prine, a Grammy-winning country and folk legend first released “Please Don’t Bury Me” as part of his 1973 album, Sweet Revenge.

Most recently, Prine has released a stunning album of collaborations with some of the biggest names in country music – and even features an incredible duet with Miranda Lambert singing Hank William’s classic, “Cold, Cold Heart.”

While there are millions of fans of John Prine out there, this family could definitely be considered one of the biggest!

Watch this heart-melting trio sing their hearts out to this song they cherish so much!

Family jam session, and no it's not a Disney song ? Thanks for the family favorite John Prine ❤ Ellen DeGeneres